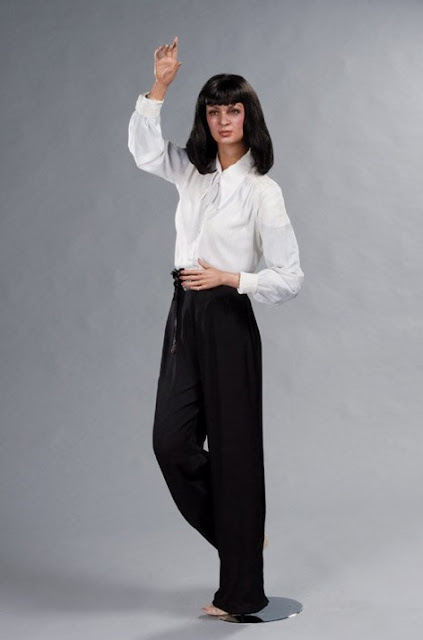 Breaking news everywhere this morning that police have finally apprehended Uma Thurman's longtime stalker, Jack Jordan, a "diagnosed" schizophrenic currently living in Maryland.  Jordan had already been convicted several times of harassing Thurman, and the actress has had a restraining order against Jordan since 2008.  "My intention was for a kind of relationship to develop between us," Jordan stated at the hearing, adding that he also realized he had maybe "overstepped" certain legal boundaries (like sending Thurman a photo of a "decapitated bride" and a card that read "my hands should be on your body at all times").  Today's arrest stems from two phone calls Jordan placed to Thurman's personal assistant in recent days.

Celebrity stalking goes on all the time, of course, and it's always big news because it so often collides two favorite stock characters of the modern imagination:  the anonymous "psycho" and the fabulous movie star.  This pairing, a co-dependent relationship if ever there was one, remains eternally fascinating because it allows us, for a moment at least, to consider our own twisted investment in the world of celebrity.  The psycho/starlet pairing in particular rewrites the fame economy's general reliance on envy and desire in the brutal, attention-grabbing language of random psychotic violence.  The manufacture of sexual celebrity has always been about cultivating the fantasy that "your plebeian hands should be on star-X's body at all times."  Like the fascination with most psychotic acts, public interest in the "crazy" stalker stems in large part from witnessing the spectacular deviance of a fellow "nobody" who has lost the ability to effectively interiorize this mass-inculcated fantasy, an individual who finally decides to become pro-active in answering the culture's deafening call to be of or near the rich, famous, and beautiful.  After the overloading of fetish signifiers that marked Thurman's most famous turn in Pulp Fiction (Louise Brooks' bob, sexy smoking, the V for victory dance moves), it's a wonder more men of this generation haven't lost their minds and camped out on her doorstep.

For a lucky few who are not, like Jordan, a schizophrenic ex-English major living at home with Mom, disposable income can be harnessed to sanctioned fantasy structures in the form of the "Uma Thurman" figurine pictured above, yours at auction (along with a figurine of that rival male who danced with her at Jack Rabbit Slim's) for around $4000.

If there is any depressingly corroded silver lining to these celebrity stalking stories, it is the opportunity provided criminologists to remind us of just how high the stalking of the non-fabulous remains in the nation--leading perhaps to an Us Weekly theory of stalker fascination: Celebrities are "just like us" (and we're "just like them") because now anyone can have a creepy weirdo initiate a wholly delusional relationship over a period of months and years.

Which makes the "hook" for the arrest of Thurman's stalker all the more interesting.  Here is a line that is featured prominently in much of the reporting today:

"When he was caught, Jordan was at his computer, with “Uma Thurman” typed into a Google search."

CNN went even more hysterical by adding that authorities arrested Jordan "just before he could hit the return key" (I promise you, these were the very words that came out of Kiran Chetry's mouth).

I don't know what authorities, or we the anxious public, are supposed to think might have happened if Jordan had completed his dastardly plan to google Uma Thurman's name for information about the actress (because, after all, I'm sure he had NEVER done this before).  Perhaps recognizing Jordan's fragile mental state, they simply wanted to protect him from the trauma of discovering that Thurman's film Motherhood made a total of $131 in the U.K. during its opening (and presumably only) weekend.

Adding the "he was on the verge of googling her name!" angle to the story, it seems to me, preys on two seemingly antithetical and yet related Internet fantasies.  On the one hand, we've all been taught to be frightened and eternally vigilant about protecting our "cyber-self" from various entities that may not have our best interests in mind.  Here, perhaps, we are to believe that in his 321,877th Google search of Thurman's name, Jordan would at last find that obscure post containing all the entry codes for her Manhattan apartment--luckily, the police got there just in time!

And yet, Jordan's Googling of Thurman (lovely that this new verb rhymes so well visually with "ogling") is also a reminder of the entire parasocial empire of the Internet, much of which revolves around this very same silent and vaguely shame-inducing search for those who may be searching for us, for those with whom one was once intimate but now know (if at all) in one of the most odd of all parasocial relationships.  Facebook, as so many have noted, is rife with both the nostalgia and trauma attending these once intensely real but now primarily imaginary relationships (as The Social Network points out, Facebook was devised in large part so that college students could know the real-time current "relationship status" of various lust-objects on campus--for older generations who have taken to the site, it is more a strangely promiscuous and occasionally confusing history of one's past romantic life).

You've probably seen sites advertised like the one below: 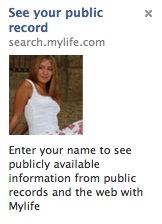 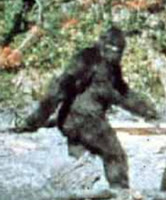 Some of these ads are simply pathetic--so far I've yet to be duped, contrary to the sidebar come-hithers on my Facebook page, that there is apparently a 25-year-old lingerie model desparately "searching" for me on the Internet.   Craven business interests aside,  however, the poignancy of this basic cyber-impulse remains.  Is there a more wistful, bittersweet domain name than whoissearchingforme.com?  It evokes one of our distant Neolithic ancestors, lost in the woods, crying out in a desperate attempt to reconnect with his or her tribe.  I am lost, please come find me.  There are many uses for such a site, I'm sure, including monitoring for potential stalkers--but how many more people take to such services out of a loneliness that the Internet itself somehow makes worse, an attempt to use the trace of a Google search, not necessarily to "reconnect" with someone, but simply as a sort of melancholy comfort that someone out there, maybe someone who was once important in your life, has also taken a moment to "think" about you (even if only in the form of an idle Google search).

Jordan's "relationship" with Thurman is wholly psychotic, of course, and the news is playing the "he was on the verge of googling her name!" angle as if this whole affair was a techno-thriller.  Perhaps that layer of suspense--the "last-second" apprehension of Jordan just before he hit the return key--is necessary if only to distract us from the entirely banal and relatively sad implications of our own unnervingly similar use of the search engine--alone and with plenty of time to kill, the tiny stalker in all of us staring dully into the computer to see if anyone out there actually still shares even the most vestigial memories of our formerly meaningful personal/emotional connections--you know, those that existed before both the Internet and the fame economy reminded us (once again...but anew!) that our "identity" is always incomplete, elsewhere, and very much "stolen."
_____________________________________________