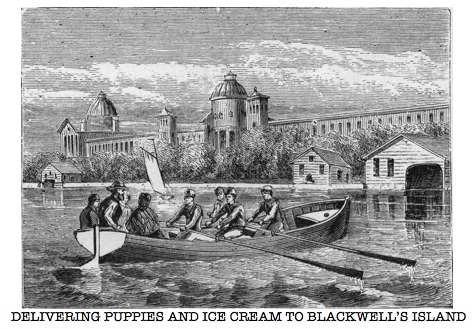 Nellie Bly
Ian L. Munro, Pub.
This landmark of investigative journalism begins when ace-reporter Nellie Bly accepts a challenge from her editor to have herself committed to New York City's notorious asylum for the insane on Blackwell Island. This was the unfortunate destination for many men and women in the city who, understandably distraught at living in utter destitution, were brought before the court and sent to Bellvue for a psychiatric examination. From there, it was but a short boat ride to Blackwell's Island where many, without money or relations to save them, would spend the rest of their lives. 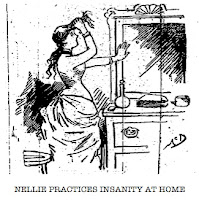 Bly realizes the only way to really get the inside scoop on the rumored abuse at the asylum is to have herself officially committed, thereby allowing her to go "undercover." She prepares for this by staring into a mirror and cultivating the look of the insane, which as this period illustration (right) demonstrates involves pulling one's hair and fending off hallucinations with the hand.  Once Bly has the insanity thing down, she then proceeds to a boarding house on the lower east side that caters to impoverished women with no place else to go.  There she does all she can to make residents think she might be unhinged. And it works.  Eventually the proprietor has her escorted to the police station, and from there to Bellvue.  Continuing the act at the hospital, Nellie soon has her ticket punched for a trip over to Blackwell. 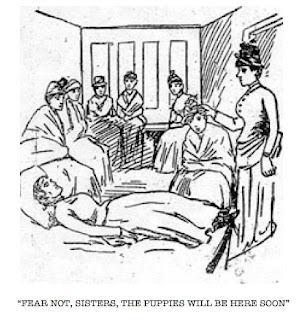 But then things take a surprising turn.  Though rumors had circulated for years that the asylum was a pit of degradation, despair, and abuse, Bly finds that the institution is actually remarkably progressive in its treatment of destitute women judged "insane" by the court.  Upon entering the facility, every new "patient" is issued a comfy wool blanket and is served a hearty meal of roast beef, milk, and potatoes.  From there they are taken to their own private rooms where they find a new puppy waiting to greet them, the dogs supplied by a surprisingly early and innovative collaboration with New York's humane society.  The doctors, Bly finds, are both attentive and caring, while the nurses are all too happy to provide their ward guests with as much ice cream as they want, 24-hours a day.  The liberal ice cream service, known colloquially in the era as "crazy cones," had its basis in the celebrated "Weir Mitchell" cure (which prescribed high levels of milk fat and bed rest as a therapy for hysterical, insane, and otherwise problemmatic women). 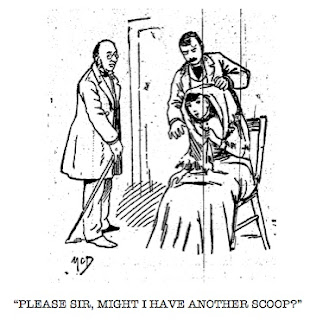 After ten days in the "madhouse," Bly finds there really is no story there at all--at least in terms of neglect or maltreatment.  Admitting she has been bested, she reveals her true identity to the asylum staff during one of the hospital's regular outdoor picnics.  The head psychiatrist then has a surprise for Nellie.  The entire staff, doctors and nurses, knew from the very start that Nellie wasn't actually "insane" (given the rigor of the hospital's "intake" procedures), but had been humoring her curious as to why she had come to Blackwell.  After much laughter by all at this mutual masquerade, Bly goes on to defeat the asylum director in an apple-bobbing contest.

Over the following year, Bly wrote a number of humorous portraits of the many insane yet lovable companions she encountered during her time at the asylum.   Ten Days in a Madhouse thus remains famous today for introducing the convention of the happy human interest story that typically closes a news magazine or broadcast.
Email Post
Labels: 19th Century New Yorkitude psychiatry