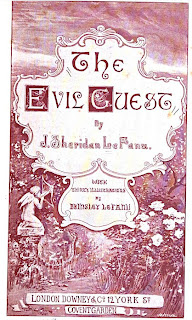 Formerly well-off misanthrope, Marston, has blown most of his money and is now reduced to walking around his crumbling estate in a foul mood, generally disgusted with his wife, neighbor, and the local minister.  A French governess, on loan from Uncle Silas apparently, takes care of the family's daughter.  Marston is none too pleased when an acquaintance from his days at Eaton practically invites himself to stay at Gray Forest for a few days.  Said acquaintance is murdered one night under vaguely uncanny circumstances within a "locked room."  Three general enigmas: 1. How did the "guest" really die? ; 2.  What's the French governess up to?; 3. What does Marston know and not know about all of this?

Despite the promising title, this does not quite rank with Le Fanu's other more dementedly inspired work.  In an attempt to retard the various enigmas, Le Fanu resorts to having characters whisper shocking revelations to one another, right in front of the hapless reader (which just strikes me as rude, or at least inelegant).  The aforementioned Uncle Silas remains the one to read if you're just reading one (Le Fanu "novel" that is).
Email Post
Labels: 19th Century mystery occultism semi-legit