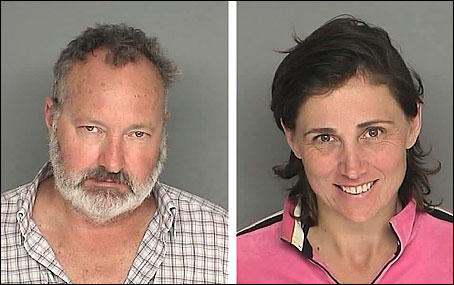 The current issue of Vanity Fair features a piece by Nancy Jo Sales titled "The Quaid Conspiracy."  By all accounts, Randy Quaid and his wife Evi (above, in recent mug shots) appear to be in the grips of a classic folie à deux, convinced that a secret cabal called "the Hollywood Star Whackers" have targeted them--not just for whispered insults at various L.A. hot spots--but for actual assassination.  The "Whackers," in their mutually fevered mind, have already taken out David Carradine and Heath Ledger, and are now working a slow campaign of extermination on Lindsay Lohan (if you are looking for a cultural, economic, or even Masonic "logic" linking Carradine with Lohan with the Quaids, sadly it is not to be found in the VF piece).

If we are to believe the reporter's set-up for the interview, the Quaids are now seeking asylum in British Columbia and spend many nights living in their car to elude their stalkers.  Writes Sales: Their car, a black Prius, was crammed with stuff—clothes, coats, shoes, papers, a pillow, blankets, and an excitable Australian cattle dog named Doji, who was hoarse from barking while he was in the pound when his owners were being detained by Canadian immigration. The car smelled of fast food and dog pee and Randy’s cigars.  Canada, it turns out, is only a compromise solution for their growing paranoia.  Evi Quaid notes at one point in the interview that the couple had tried to drive to Siberia, but “couldn’t figure out how to get there” (raising an interesting question: could a Prius make it across the Aleutian ice bridge?  Could be some real sponsorship opportunities there). 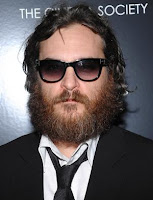 Sounds pretty desperate; that is, if any of this is actually true.
Joaquin Phoenix's extended portrayal of a crazy person--a two year turn as a "former actor" turned doughy rapper that culminated in I'm Still Here (2010)--has certainly raised the bar on the simulation of celebrity psychosis.  There is still some ambiguity as to whether or not Phoenix was in fact "losing it" at the time of his infamous appearance on The David Letterman Show, and if in turn the whole "performance art" angle was simply a way to rehabilitate a genuine nervous collapse.  Skeptics, on the other hand, point out that people undergoing mental disintegration typically do not have a documentary crew follow them everywhere they go (although the jury is still out on the three Kardashians.  Statistically, at least one of them is liable to crack on camera, God willing).

Of course, Vanity Fair wants us to believe the Quaids have gone completely insane because that would be oddly comforting to the typical Vanity "I really only have an intellectual interest in celebrity bullshit" Fair reader.  The spectacularly crazy celebrity is infinitely more interesting than the garden-variety schizophrenic mumbling to himself at the bus stop, inasmuch as star-insanity can be gleefully consumed as a form of punishment for wanton hubris (of fame, talent, money, etc.).  The untreated and wholly anonymous schizophrenic left to wander the streets, unnoticed by Vanity Fair, is just depressing--no logic, no lesson.

Why would a celebrity simulate insanity?  Perhaps they believe it will relaunch a stalled career by virtue of their spectacular commitment and demonstrable talent in playing crazy for a few months (and really, this is no more a hardship than De Niro getting fat for Raging Bull).  And to the Quaids' credit, if this is all an act, apparently it is one convincing enough to have compelled Andrea Canning of Good Morning America to ask them outright, "Are either of you mentally unstable, schizophrenic, or on drugs?" Then again, how hard is it to fool morning television fluff-droids?

Or perhaps these occasional fits are a genuine insanity born of a particularly brutal high/low collision between Hollywood and "High Art."  Phoenix, after all, doesn't call his turn as psycho-rapper a "joke" or a "put-on," but refers to it instead as "performance art."  Meanwhile Evi Quaid, we are told, is a former L.A. "It" girl "who once modeled nude for Helmut Newton and put up a show in a gallery in L.A. consisting of giant photographs of her pierced vagina."  How better to say I live in Hollywood but am not of Hollywood (somehow, I doubt a similar crisis will ever confront Rob Schneider). 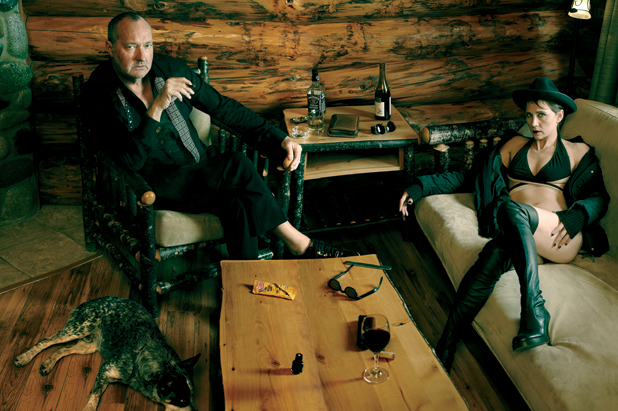 The image is less a candid shot of desperate fugitives on the run than a studied publicity photo of eccentric celebrity at play.  And why not? Regardless of whether or not the Quaids' really believe the "Hollywood whackers" are out to get them, they need all the publicity they can get--either to help save their lives (by drawing attention to the whacker menace) or to keep the Quaid name out there once they bounce back from this bout of "temporary insanity."

So many details: The empty whiskey bottle as a masculine emblem of "renegade" status, Quaid sockless and smoking like a Hemingway pausing between chapters.  The Jim Beam paired nicely with
Evi's more elegant and curvaceously feminine bottle of red wine, echoed in her advanced presentation of "come hither" couch languor.  The ubiquitous Hollywood shades, Quaid's aviators folded neatly on the side table with Evi's more "arty" Euro-specs on the coffee table.  A room that says sophisticated rustic exile rather than Motel-6 desperation (it's as if they dug up the old "Great Northern" flats from Twin Peaks for this shoot)--a faithful dog on the floor completes the image of gentrified hunting lodge/artists' retreat.

And then there are the clothes.  Vanity Fair exists to tell us what people are wearing, even if they are only a week or two away from exclusively modeling straight jackets.   Reporter Sales thus informs us that Quaid "was wearing Buddy Holly glasses, a blue shirt, an Armani blazer, and a purple tie; he looked slimmer than in years past and surprisingly stylish for a man on the run" (yes, "surprisingly" stylish).  Evi Quaid, meanwhile, appears to have taken the opportunity of a VF spread to dust off the old Helmut Newton fetish boots and flash some 40-something skin.  Looking at this photo, one has to ask: are they genuinely on the run in fear of their lives, or are they in Vancouver to negotiate a new production of Einstein on the Beach?)

I'd like to think the Quaids are well and truly psychotic at the moment.  If not, we have just another publicity "stunt" involving actors and their fame-satellites doing whatever they can to be noticed in an increasingly competitive fame economy.  But if they are genuinely crazy, we are confronted with a more terrifying prospect than insanity itself: the performance of celebrity fabulousness is now so ingrained, so virulent, that even those in the grips of raging insanity are able to pull it off effortlessly.  In Sunset Boulevard (1950), Norma Desmond demonstrated that a "star" could still play a "star" on-screen even as reality collapsed around her.  This picture of the Quaids, on the other hand, argues that "celebrities" are now wholly proficient in performing fame's "backstage" drama of envy, leisure, and desire even while allegedly living in a piss-soaked Prius and suffering acute paranoid delusions.  If they really are crazy, that is one truly disturbing picture, even more so than the candid "mug shot" of Frances Farmer typically offered as evidence of her classical studio insanity.
______________________________________________ 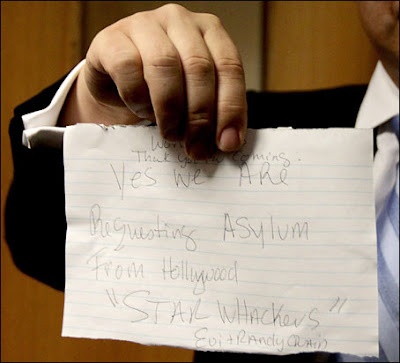 In other and most likely related news, the custodians of "sanity" over at the Diagnostic and Statistical Manual of Mental Disorders (or the DSM as it is known by most) have announced the next edition, due in 2013, will remove Narcissistic Personality Disorder as a recognized psychiatric condition.  What took them so long?!
Email Post
Labels: Celebrity Bullshit Fame Narcosis Psychosis