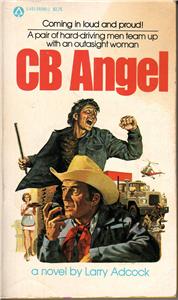 Yancy goes by the handle "Lone Ranger."  His pal Banks, a full-blooded Sioux Indian, is known as "Tonto."  Tonto and the Lone Ranger met in 'Nam where they got each other out of a lot of jams in the shit. Back in the states, they've kept the partnership going as truckers, haulin' freight wherever freight needs a haulin'.  Then one day....

CB Angel is another artifact of the surprisingly deep field of "CB Radio" culture that thrived in mid-70s America (1977 was a significant year for this "cult" with the release of both Handle with Care and Citizen's Band) in the theaters).  Long before there was Face Book, the lonely, alienated, and otherwise disenfranchised tech-head looked to the CB's "walkie talkie" 2-way conversations as the basis for a whole new lifestyle.  Much of this also had to do with America's continuing fascination with "Trucker" culture (now dead, for the most part, except for the relatively recent resurgence in "ironic" foam-billed trucker hats in Silverlake, Wicker Park, Williamsburg, and other hipster magnets).

In CB Angel, Yancy and Banks are enjoying the good life--eating lots of pancakes, bedding waitresses, engaging in constant homoerotic semi-racist ball-breaking about each other's racial features--when they get mixed up with a mob shipment of tobacco.  Various mysterious figures are constantly ambushing them in an attempt to steal the load--but Yancy and Banks' Vietnam training typically makes short work of any goons sent their way.  Throughout their cross-country adventure, they receive oracle-like advice on the CB from "Foxy Lady," generating two enigmas:  1. who's trying to steal their stuff? and 2. who is Foxy Lady and what is her relationship to all of this?

The CB/trucker phenomenon would be over only two years later with the arrival of B.J. and the Bear on NBC.  The show followed very much the same partner set-up as CB Angel, only it replaced the full-blooded Sioux Indian character with a chimpanzee.
Email Post
Labels: 1970s criminal behavior kickers of ass pulp