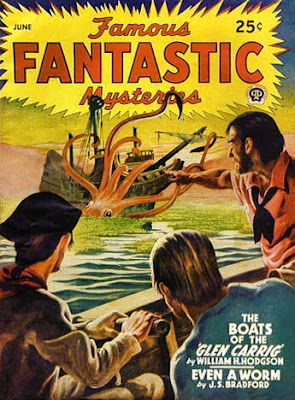 William Hope Hodgson
Chapman and Hall, Ltd.
(now in public domain)
William Hope Hodgson has the dubious honor of being known primarily as a "major" influence on a "minor" author, in this case H.P. Lovecraft.  Hodgson also delved into the "cosmic horror" typically associated with Lovecraft, most notably in Hodgson's extraordinarily creepy novel of 1908, The House on the Borderland.  The Boats of the Glen Carrig dates from the previous year and remains wholly within the preternatural--but this makes it no less creepy, let me assure you.

The set-up is simple enough.  It's 1757 and the Glen Carrig has hit a rock.  We open with our narrator aboard a lifeboat in search of rescue.  Almost immediately they find an island and begin their way up a creek looking for help.  Hodgson's talent for uncanny narration is apparent from the very beginning--the island is eerily flat, depressingly so, pocked by a few scrubby trees that may or may not be capable of walking around at night and eating people.  They leave quickly, primarily because the vibe is just too overwhelming.  This sets the overall tone for the book: Verne's Mysterious Island as interpreted through a lens of paranoia and depression.

After the obligatory storm at sea section, we arrive at the heart of the book.  Their boat damaged, the men wash up on a freaky island where they find themselves under instantaneous and escalating attack by the following:

Burning up the island's valley pretty much takes care of the man-eating toadstools, while staying out of the water greatly reduces the odds of being eaten by a devil-fish.  The big crabs are more annoying than dangerous, leaving the "weed men" as the crew's primary adversary.

The weed-men are worthy foes.  Described by Hodgson as giant white leeches with "human-like" faces that leave behind a trail of pungent slime, the "weed men" are on the attack any time the crew stupidly lets the bonfire grow dim.  Like much horror of this era, most of the book centers on the lingering dread of the weed men (although they do mount a few spectacular attacks).  Hodgson has a real talent for the uncanny effect of the indexical marker of horror lurking "somewhere out there."  For example, at one point in the book, the crew has to deploy a large rope down a hillside toward the beach.  Each night, a man has to stand watch and periodically check the tautness of the rope.  If the watchman feels any movement in the rope, he has to sound the general alarm...because it's a sign that the slimy leech creatures are undulating up the line.  I'm still creeped out just thinking about it.

So many uncanny and disgusting things are happening in The Boats of the Glen Carrig that there is little time for "character development."  Which makes the ending all the more surprising.  Throughout the adventure, our narrator works under the supervision of the "Bo'Sun," the large strapping sailor in command of the lifeboat.  Every so often, we get a hint of the narrator's pride in impressing the "Bo'Sun" though an act of skill or bravery.  And at one point, when the narrator is "feeling gloomy," the "Bo'Sun" seeks him out and does what he can to cheer up the young man.  In short, they become the dynamic duo that saves everyone from death.  Toward the end, a girl is introduced into the picture, rather irritatingly and implausibly given all the homoerotic bonding that has preceded her in the story. Once safe and back in civilization (i.e. England), the narrator, we discover, is now married to the young maid he met during his adventure.  But we also learn the following in the final paragraph of the story (spoiler alert, obviously)

Now one further thing there is of which I must tell. Should any, chancing to trespass upon my estate, come upon a man of very mighty proportions, albeit somewhat bent by age, seated comfortably at the door of his little cottage, then shall they know him for my friend the bo'sun; for to this day do he and I fore-gather, and let our talk drift to the desolate places of this earth, pondering upon that which we have seen--the weed-continent, where reigns desolation and the terror of its strange habitants. And, after that, we talk softly of the land where God hath made monsters after the fashion of trees. Then, maybe, my children come about me, and so we change to other matters; for the little ones love not terror.

This novel was originally published in 1907, but has been reprinted in various formats several times since.  I read a kindle version--but be forewarned, some of the many "free" e-text versions cut off the book's secondary title in which we learn the following crucial information:

Being an account of their Adventures in the Strange places of the Earth, after the foundering of the good ship Glen Carrig through striking upon a hidden rock in the unknown seas to the Southward. As told by John Winterstraw, Gent., to his Son James Winterstraw, in the year 1757, and by him committed very properly and legibly to manuscript.

The illustration above is from the story's reprinting in a 1947 issue of Famous Fantastic Mysteries.  I have used this for the graphic in this piece because, let's face it, it is without a doubt the most awesome.
Email Post
Labels: creepy and/or uncanny horror pulp queerish sci-fi sea-faring slightly disgusting