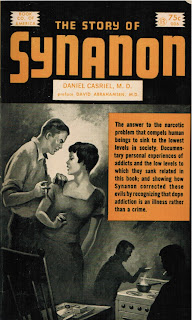 Mostly laudatory account of Synanon from its early days as a radical intervention for drug addicts (and before it became more infamous as a weird Californian cult).  Officially launched in 1958, Synanon originally provided addicts an opportunity to live and work under one roof as therapy for combating their addictions.  Like all organizations that are (or eventually become) cults, Synanon depended on a rather drastic "intake" procedure that involved breaking down the addict/inductee's sense of identity (they would eventually require all members to shave their heads, which landed many of them parts in George Lucas' sci-fi "student-like" film, THX-1138 (1971).  Philip K. Dick, in his persona of Horselover Fats, would later blame Synanon for the suicide of a close friend in his hallucinated novel Valis (1981). 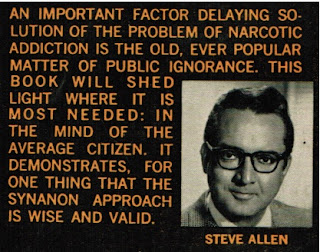 Here we get an early account of just how brutally abusive "the Game" (Synanon's name for the group humiliation of new members) could be.  In one extended account, Synanon founder Chuck Dederich launches into a lesbian couple seeking treatment (the fact that one member of this couple is transgendered, wearing a suit and tie and using the men's room, seems to drive him particularly insane).  Abuse is heaped onto both until they agree to end their "charade"and act like "ladies."  Unbelievable.

Like Scientology, Synanon gradually became more paranoid and reclusive as an organization, sending out a squad called "the Imperial Marines" to deal with those who left or badmouthed the group.  Also like other cults, Synanon at some point began reassigning spouses and engaging in other psycho-sexual hijinx.  Still, as of 1963, they were "mainstream" enough to earn the endorsement of TV jack-of-too-many-trades Steve Allen.