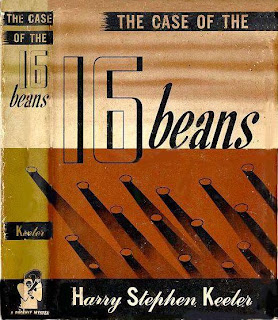 Is Harry Stephen Keeler the poor man's James Joyce?  No, probably not, but this once forgotten now oddly compelling writer of "mysteries" from Chicago was certainly as obsessive about his language as Joyce.   Consider the opening paragraphs of The Case of the 16 Beans in which Keeler lays out the central enigma facing his "protagonist" Boyce Barkstone.

Boyce Barkstone leaned forward in his chair, aghast.
“And do you mean to tell me,” he repeated, unbelievingly, to the attorney seated facing him, “that my grandfather left me only a handful of beans—out of an estate of practically $100,000? And left the $100,000 itself—or nearly so—to that fool Academy for the Proving of Social Theories?”
“I’m sorry to say I do,” echoed the white-mustached man facing him in the bright high-up skyscraper office, and contemplating him gravely at the same time through round owl-like tortoise-shell eyeglasses. “For you’ve just read his will—or the carbon copy of it. With which at least, Boyce, I can say I had nothing to do. It was my partner who actually drew it up—for, like yourself, I’ve been out of town for a week, you know—though even he tried to argue your grandfather out of it—but to no avail.”
“My God!” commented Boyce Barkstone, passing a hand over his forehead and shoving away the lock of brown hair that persisted in falling downward over his steel grey eyes. “That’s—that’s what comes of knowing a few smart-alecky wisecracks—and handing ’em out—free gratis!”
Glumly he gazed out of the broad window next to the capacious chair in which he sat, which looked down on the morning traffic pouring, this sunny June morning, past 47th and Broadway, far far below; then, withdrawing his gaze, he contemplated himself glumly, across the thickly green carpeted and mahogany-furnished office, in the tall cheval mirror fastened to the closet door in the opposite wall, seeing only, however, just a young man of 28 or so, with steel grey eyes, who, not so terribly long ago, as it seemed to him, had been wearing a blue naval coast patrol uniform, but who today, now that the war was over and gone, was dressed in a brisk pepper-and-salt suit, and four-in-hand tie with a colorful plaid of just such a degree as a modern New Yorker might safely wear.
Oliver Tydings—of Tydings and Plenderleith, Attor­neys-at-Law—was, in the meantime, gazing puzzledly at Barkstone, tapping thoughtfully on his glass-topped desk with the fingers of one hand, adjusting with the other a small bronze ashtray to a better position, moving slightly the little onyx desk clock whose hands now stood at 9:01 o’clock.
“What on earth do you mean, Boyce?” he asked curiously. “About knowing ‘smart-alecky wisecracks’—and handing them out free gratis? Just because you’ve run your grandfather’s poky, stodgy little real-estate business for 6 years, there at the 242nd Street station of the Broadway Subway—or 6 years minus your year-and-a-quarter time out while serving on that Navy coast patrol vessel—doesn’t mean you can’t speak—as a young man might—any longer. Real-estate men aren’t supposed to be old fogies, are they? And besides, the matter has nothing whatsoever to do with your grandfather’s will, so far as I see it.”
“Oh, no?” was Boyce Barkstone’s sepulchral rejoin­der, the while he gazed oddly, in turn, at the other. “Well, listen to this little incident then.” He paused. “The last time I saw Grandfather alive—which, according to the date on this will, was the morning of the day he drew the will—I said, inadvertently, and not knowing I was addressing him—it was a beastly comedy of errors, understand—a ghastly mistake—a case of—of two other men, as you might put it—anyway, I said to him—inadvertently and unwittingly: ‘Nuts to you, you old fool!’ ”
“Oh-oh!” echoed the attorney. And gazed, understanding written on his face for the first time, at a large white tag, attached to a tiny white cotton tobacco bag sealed with wax, on his desk, the uppermost side of which tag bore handwriting which read:
Beans to YOU, sonnyboy, as per my will!
“And so that’s what’s back of his bitter bequest, eh, Boyce?” he echoed. “That you’d said to him—to your own grandfather—who had befriended you—‘Nuts to you’—and called him an old fool to boot?” He frowned deprecatingly, though still puzzledly, unbelievingly. “And so you said that to him, in the morning? And he comes straight down here, in the late afternoon, and makes out a will which leaves to you—”

It's all a misunderstanding, of course, as Boyce did not in fact say "nuts to you, you old fool!" to his kindly grandfather, thus incurring the elder's wrath and initiating a vengeful rewriting of the will so as to respond "beans to YOU, sonnyboy" from beyond the grave.  So what did happen?  That is "The Case of the 16 Beans," or at least half of it, as there is a second plot equally bizarre that somewhat intersects with the bean enigma.

This is all classic Keeler: a shaggy dog story so shaggy that it creates even shaggy dog sentences;  a relentless lack of plot; endless rambling descriptions, many of them utterly pointless; characters who remain on the phone gathering plot details for chapters at a time; the odd character names; the constant insertion of obvious "back story" into seemingly spontaneous dialogue; the OCD-like specificity of detail (Boyce here doesn't read the will itself, but a "carbon-copy" of it); and so on.

Keeler is often described as a "bad" or at least "weird" writer of mysteries, but I don't think that's fair to his actual intentions.  While his engimas are insanely complicated and often ridiculous, the main attraction for writing seems more in the play of comic language (including a staggeringly insensitive commitment to "ethnic" dialogue).  There is no real mystery in any of his books (that I've read, anyway); in fact, this book is called "The Case of the 16 Beans" despite the fact that no one involved is really a detective of any kind.  There is no "case," just a young man left holding a puzzling bag of beans.

Why read him then?  Within all the convoluted sentences and actionless plots that go nowhere there emerge little nuggets of inspired insanity.  Here, for example, we discover that the grandfather, needing 16 different beans to enact his plan, finds them at a new high-rise shopping facility in downtown Manhattan called "the Seediteria."  One character hates the Chinese so much he devotes his fortune to buying up the land beneath "Chop Suey" restaurants just so he can close them down.  Another clings superstitiously to a copy of a book called The Way Out by a Mr. Highsmith because he thinks it's actually a book called The Way by an author named "Out" published by Highsmith.  Follow me?

Rumor has it Keeler was briefly institutionalized as a young man.  His writing does little to contradict this suspicion.
Email Post
Labels: 1940s author demonstrably insane Chicago mystery New Yorkitude