As I'm sure most of you are aware, the Mattel Corporation has recently issued a new Barbie doll--just in time for the Christmas holidays--that constitutes both a moral outrage and an existential threat to our culture at large.  I am speaking, of course, of the new "Video Girl" Barbie, a doll that features a tiny camera implanted in Barbie's necklace and an LCD screen embedded in her back.  The idea is to encourage little girls to make their own movies with the Barbie doll camera and then, using a simple software package, edit the movies and share them with friends online.  I am certain I do not need to point out just how monumental a threat this technology presents, not only to the little girls who might use it, but to the nation as a whole.  For it would seem a video camera is not the only thing "hidden" in this doll.  In the wrong hands, "Video Girl" Barbie has the potential to unleash a most heinous, disgusting, and destructive force, one that continues to prey on our youngest and most vulnerable citizens.  I am speaking, of course, about the monstrous threat posed by feminine creativity.

How our corporate brothers at Mattel allowed this to happen I do not know.  There will a thorough investigation in the new year, I assure you.  In the meantime, however, I think it would be prudent to review our current policy position on the entire Barbie project.  Toward this end, I have asked our graphics department to produce two panels that should better illustrate both the "ideal" use of Barbie and the potential hellscape presented by the introduction of "Video Girl" Barbie.

Below (fig. 1) we see the "ideal" Barbie relationship that we have worked so hard to institute over the past fifty years.  "Barbie" and girl-subject are locked in a mutually annihilating exchange of judgmental gazes organized around issues of grooming, fashion, popularity, appropriate behavior, and competition for boy attention.  As we know, over a period of time this helps undercut the confidence of the girl-subject, inculcating a low-grade paranoia that makes her both a docile political force and, more importantly, an ideal consumer of over-priced cosmetics and "new and improved" cleaning products. 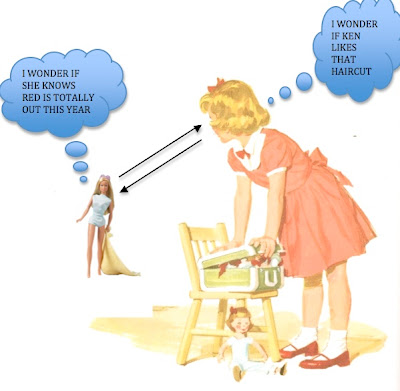 Compare this to the horrifying prospect below (fig. 2).  Here we see girl-subject now looking through Barbie rather than at Barbie, thereby forging potentially disruptive political alliances as girl subject begins using her own creativity to demystify the world of horseshit in which she must live.  Indeed, the act of cooperating with Barbie might even set a dangerous precedent for future acts of feminist solidarity, many of which could have a negative impact on our ability to enjoy alcoholic energy drinks, assorted instantiations of Taco Bell "beef" products, and the timeless wisdom of Two and a Half Men. 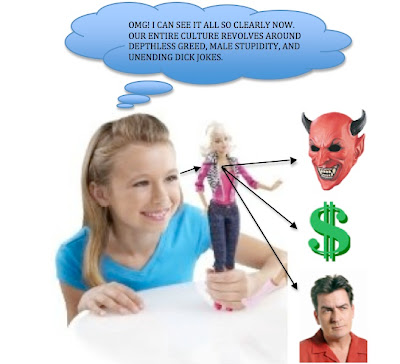 If you have been monitoring the media over the past week, I am sure you have been heartened by the aggressive disinformation campaign we have initiated that links "Video Barbie" with probable abuse by pedophiles.  We hope you will help spread this meme in conversation during the upcoming holiday festivities.  Remember: there is no positive outcome in girls learning to shoot and edit their own "movies."  The sooner the nation's girls return to staring at a Barbie that returns their gaze in silent judgment, the better.