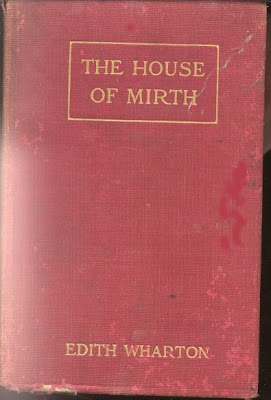 This story has an “ironical” title and takes place way back when ladies had to worry all the time about what they said or did because it might make people think they were slutty.  Our hero’s name is Lilly Barth and this is a tale of how she totally got screwed by all kinds of shit that wasn’t really her fault. Like at the very beginning she decides to go chill for a couple of hours with her friend Sheldon back at his pad and even though they don’t even come close to hooking up or anything, she gets all freaked out when this rich Jew sees her coming out of Sheldon’s apartment building (because he will tell everyone she is a slut). But Lilly and the Jew both act like no one saw anything anyway, which kind of makes things even worse.

After that we find out that Lilly, who is looking to land a rich husband, keeps getting conned by all her super-rich friends into playing a game called “Bridge” even though she doesn’t have as much money and so when she loses it’s a big deal because she won’t have enough money for all the dresses and hats and make-up she needs to catch that rich husband I was talking about.  I saw this as a kind of “catch-22” for Lilly because if she doesn’t play bridge she can't hang out with all the rich dudes who might marry her, but if she does play bridge she might lose all her money and end up having to wear a potato sack or something which makes it tough to attract the best rich dudes. She almost gets to marry this one guy who seems really boring even though he has lots of loot. She's pretty sure she can put the hooks into him at church one morning but oversleeps and ends up spending the afternoon hanging again with Sheldon.  But that's okay because she knows she's so hot she can still reel in the rich guy later.  But no dice, because the boring rich guy decides to marry a girl not nearly so hot but better at going to church and reading.

About this point you might be thinking to yourself why don’t Lilly and Sheldon cut to the chase and get together since they obviously have a thing for each other? But at this point before Lilly gets really poor, which happens later, Lilly still thinks she has a shot at some guys who are a lot richer.

At any rate, after her blowing her chances with the rich boring guy, Lilly kind of becomes friends with this married dude who promises to invest her money in the stock market. At first this seems really cool because Lilly really needs the money, but then we find out the married dude is just giving her the money and expects some sex in return. But Lilly tells him to back-off, dude, I really thought you were investing my money—not paying me to have some sex on down the road.  But now everyone starts thinking she’s a whore even though she isn’t having sex with anyone (that we know of). And then somehow Sheldon sees her coming out of the married guy’s house, and even though nothing happened again (just like at Sheldon’s place earlier), he gets all mad about it and decides to go to Monte Carlo and give up on Lilly.

This is where the second part starts a few months later where we find out Lilly is now hanging on a yacht with more of her super-rich friends. But they never seem to do any cool yacht stuff like fish or ski or swim but mostly just go to shore and eat expensive dinners and try to get introduced to some European big wigs.  Then, even though Lilly is mostly minding her own business, she gets right in the middle of a big fight between this old rich married couple and the wife throws her off the yacht, which is like a total disgrace because its as if the rich wife is saying Lilly can’t be trusted around anything with pants on—even though Lilly didn’t do anything at all.  So Lilly comes back home thinking, oh well, at least when my rich aunt dies I’ll have enough money to open my own hat shop or something even if I don’t find a rich husband. To kill some time she drives to Alaska with a bunch of new rich people who also have a lot of money but apparently not the right kind because this is a big comedown for Lilly it seems. Then her aunt finally does croak but Lilly totally gets screwed in the will because even her own aunt thinks Lilly is kind of a slut now (when she was still alive).

After Lilly loses out on the will things start to get really shitty for her.  She has to take a job helping this stupid younger richer girl get dressed every morning so that girl can find a rich husband, just like Lilly was trying to do a bit earlier in the story.   But even though Lilly is just trying to pay the bills and is off the rich-guy market all the super rich people still seem to hate her guts.  Which reminds me, Lilly also has a big stack of intimidating letters she could use to blackmail the main bitch that’s making everything especially shitty for her, but she keeps not using them for her righteous revenge.  I think this is supposed to make us like Lilly more because even though she’s pretty much a prime donna she still doesn't want to rat on people no matter how rich or mean they are.

After she quits helping the stupid younger girl to get dressed, Lilly has to take an even worse job making hats—which is really embarrassing for her because it’s so “working class” and she’s never been around people that actually do anything.  But she needs the money bad and figures maybe one day she can still open that hat-shop she was thinking about.  But all the other “hat girls” laugh at her because she sucks so bad at making hats, even though she was totally sure she had real talent for it.

Obviously by now she’s come a long way from her days chasing the rich dudes because she's living in a crappy apartment with dirty curtains and roaches and mice where all she can do for fun is sit around looking at all the awesome dresses she used to wear when she was richer and hotter. And then she even gets fired from her hat-making job and has no money left at all. She gets so hard-up she even thinks about marrying the rich Jew from earlier, but he’s totally moved on at this point and tells her even though he still thinks she’s great he needs a wife that won't screw up his plan to be even richer and more powerful.  Meanwhile she sees Sheldon a couple more times and you keep thinking one of them is going to pipe up and say, hey, let’s just ignore all this stupid stuck-up rich shit and move in together, but it never happens because even though we kind of feel sorry for Lilly what with having to make hats and everything, she’s still kind of a stuck-up rich bitch at heart. Then one night she can’t sleep and takes too much of some old-timey drug and dies. The next morning Sheldon finally gets his shit together and comes over to tell Lilly he loves her, but it’s too late.  Because she’s dead. The end.

I really, really hated this book. If everyone back then had just said what they mean and meant what they said they’d all have been a lot happier. And even if people were going to play all these mind games with each other about who is "in" and who is "out," Lilly should have said something to Sheldon a lot earlier about how broke she was because then she’d still be alive today.

In my opinion, the ladies have it much better today because even if you see a chick doing “the walk of shame” in the dorm nobody really cares all that much because you figure she and some dude hooked up but so what?   Because we are smarter now and not repressed its really not that big a deal to admit you have had sex because everyone knows everyone wants to hook up and it doesn’t make sense to lie about it all the time.
Email Post
Labels: Books Modernity-ism That Dude...