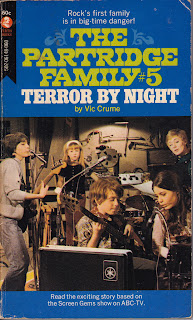 Everyone's favorite busload of exploited child labor has a month to kill before embarking on their big fall tour, leading Mom to take out a month's lease on a remote beach home near Cape Cod.  Coming with the property is the cook and her weird and extremely off-putting daughter, Prudence, who in addition to being freakishly skinny also carries a black cat with her everywhere she goes.  As the Partridges look to unwind, strange things begin happening all around them.  Keith and Laurie Partridge find a mannequin hanging from a tree with a sign that says, "Welcome."  Later they find the phone wires to the cabin have been cut.  Because he's an irresponsible teen-idol dick, Keith is determined to solve the mystery without revealing any of these disturbing clues to his mother--after all, she would only "freak out" and cut the vacation short.  At one point most of the family piles onto the bus to tour Salem, Massachusetts, and we learn that the cook and her weird daughter are generally shunned in the local community for a historical association with witchcraft.  What seems supernatural, threatening, and portending of the abyss becomes, once again in true Udolpho style, something much more worldly.  Also, the Partridges take time to rehearse tunes for the tour--but you have to just imagine this in your head as no actual titles or lyrics are provided.

I should also like to point out, in case anyone finds it interesting and/or enigmatic, that Terror by Night and The Haunted Hall (Partridge Family #2) are without a doubt the most commonly encountered titles in what ended up being a 15 or so part publishing series.  Go into any used book store (if you can find one), and these are the two most likely Partridge reading products you will find.  Why, one wonders?  Were they much more popular than the others, leading to bigger print runs?  Unlikely--each book is pretty much like all the others.  Are they particularly terrible, thus leading to their quick donation to thrift stores and bookshops?  Again, unlikely, for the same reason.  Did ABC overproduce these two titles as part of some larger promotional campaign, perhaps as a tie-in to the new season or as an elementary school giveaway?  Who knows?  It remains one of the many mysteries of cultural production and popular circulation that must remain unanswered.
Email Post
Labels: 1970s horror musical evil mystery occultism philosophy TV