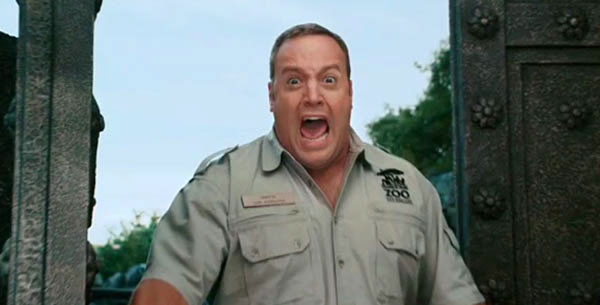 Zookeeper with Kevin James opens this weekend and there’s not a god-damned thing you can do to stop it.  Moreover, it will probably make a lot of money genuinely entertaining people you can’t stand; or more charitably, the pre-adolescent children of people about whom you have no real opinion.  You may even find yourself forced to see it due to circumstances beyond your control.  If so, Godspeed and good luck.  To make your experience slightly less hellish, please feel free to print the following checklist and take it with you to the theater.  It is a comprehensive inventory of things that we can probably expect to see in Zookeeper.  As each of these comedic affronts transpire, you can amuse yourself by checking it off the list.  After you're done, you can even score your results.  Have fun!
Zookeeper Checklist
[ ]  Kevin James eating a pastry
[ ]  Kevin James eating a large bag of chips
[ ]  Kevin James involved in comically futile fitness routine
[ ]  First Appearance of workplace bully, either “boss” or rival employee
[ ]  Kevin James’ comic double-take at hearing first words spoken by talking animal
[ ]  Kevin James humiliated in front of “love interest”
[ ]  First cursing zoo animal
[ ]  Feces thrown
[ ]  Feces stepped in
[ ]  Love interest overhears Kevin James talking to animals; thinks he’s crazy
[ ]  Kevin James invents awkward, unconvincing story as to why he was
talking to an animal
[ ]  Love Interest surprises a pantless Kevin James, mistakenly assumes he is
about to have sex with a zoo animal
[ ] Kevin James invents awkward, unconvincing story as to why he was
pantless in zoo pen with animal
[ ]  Zoo animal speaking with “funny” ethnic and/or regional human accent
[ ]  Joke about sexual allure of “swollen” or “red” hindquarters
[ ]  Kevin James mistakenly consumes disgusting zoo animal food
[ ]  Elephant using trunk to douse Kevin James and/or workplace bully
[ ]  Running gag involving llama or camel renowned for either stinking or spitting
[ ]  A zoo animal behaving in a way that defies our typical view of species (i.e.
monkey afraid of heights; pacifist lion, etc).
[ ]  Kevin James fart attributed to zoo animal
[ ]  Zoo animal fart attributed to Kevin James
[ ]  Primate makes inappropriately bawdy remarks about Kevin James’ love
interest
[ ]  Kevin James takes shot to the balls
[ ]  Kevin James takes repeated shots to the balls
[ ]  Zoo animals execute a cooperative caper to assist Kevin James, but
without his knowledge (each animal displaying a distinctive "skill")
[ ]  Zoo animals engaged in “typical” male recreations (i.e. poker, bowling, cigar smoking, etc.)
[ ]  Zoo animal paired with “nagging” spouse
[ ]  Love interest tells Kevin James she’s always liked him for “who he really is.”
[ ]  Humiliation of workplace bully, most likely in pile of animal dung
[ ]  Ending in which zoo animal implies, by words or by winking, that Kevin James and love interest are about to have sex--most likely the monkey voiced by Adam Sandler.


Score
Perfect 30:
Warning! May actually be a subversively brilliant critique of the genre
25-29:
It's the end of the world and I feel fine.
20-24:
Could my little (brother/sister/cousin/nephew) really think this is funny? Am I really related to such an imbecile?
15-19:
Like watching a 'King of Queens' marathon with the flu  and no access to a remote
10-14:
The sweet spot of shit
5-9:
Slightly less terrible than predicted; better than Grown Ups, certainly
1-4:
Sincere apologies to all the talented people involved in this project
Email Post
Labels: Animal Kingdom Bio-Horror Cinephilia Commerce Filmed Product Intentional Comedy Regressive Phenomena