Lo and behold, a hidden gem!

Dan Lewis is a cub reporter in Philadelphia sent by his editor to infiltrate and write about the New York City "underworld." A couple of days later he's on a train to Manhattan with $5000 in a money belt and a plan to let the story "find him."  And it does.  No sooner has he checked into his fleabag hotel for the first night, thugs break into his room, steal all his money, and rough him up a bit for good measure.  Cut off from his money and his editor (who conveniently absents himself for the month), Lewis quickly finds he's going to have to live by his wits for awhile.  For company, he has a self-nominated "existentialist" who works at a greasy diner on the lower east side, and "Kay," a young woman orbiting the city's real criminals who nurses Dan back to health after his beating. 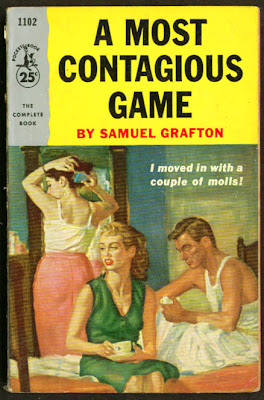 Grafton's strength is in capturing the generally aimless, moment-to-moment life of the criminal world.  One truly inspired paragraph notes how criminals, artists, and bohemian-types are united in their hatred of society, and demonstrate that hatred by refusing to live according to the same clock as the straight world.  Staying with Kay and a few other criminal boarders, Dan is dumbfounded when one woman starts roasting a turkey late one afternoon for no particular reason.

Eventually Dan meets up with one of the top bookies in the city, working first as a bodyguard and then later as a possible successor to the man's criminal empire.  The game is "most contagious" because Dan finds he has a real aptitude for the criminal life.  Will he get sucked into the racket forever or make it back out to the straight world?  Read and find out.

Other moments worth noting: early in the story, Dan has to elude a detective before he blows the reporter's cover.  Ingeniously, Dan ducks into a TV studio where they are broadcasting a live game show called The Human Ordeal, a swipe by Grafton at the then popular trainwreck Queen for a Day.  One contestant on the Ordeal must hang by his thumbs for 2 minutes in order to win hospital money for his son with spinal meningitis.  Dan wrangles his way onto the stage so that he can disrupt the proceedings, create confusion, and slink away (a device used a few years later in Hitchcock's North by Northwest).

Also interesting here is the menage-a-trois "come-on" of the cover.  "I moved in with a couple of molls!"  The good folks at Pocket would have liked you to think this was the central problematic of the novel, but as so often happens in the pulp bait-and-switch game, this dilemma confronts our protagonist for less than one page.  Brought back to Kay's apartment (shared by several crooks, male and female), a cheap blond makes a pass at him one night in the hallway, mainly to piss off Kay.  Dan resists, and two pages later he's out of the house.  So that's that.

Grafton passed away in 1997 at the age of 90.  Below is the bulk of his New York Times obituary, which I include here in the interest of pulp intellectual history.

Mr. Grafton, who continued to contribute to national magazines into the 1980's, became widely known through his syndicated column, ''I'd Rather Be Right.'' Appearing in as many as 120 newspapers nationwide, it ran from 1939 to 1948 and supported the New Deal, the Spanish Republic and Gen. Charles de Gaulle's Free French, among other things.

Born in Brooklyn and raised in Philadelphia, Mr. Grafton started writing for The New Republic as a teen-ager. He graduated from the University of Pennsylvania in 1929 and that year won a national essay contest and, with it, a reporting job on The Philadelphia Record. He moved to New York in 1932 and became editor of The New York Post's editorial page.
Email Post
Labels: 1950s criminal behavior has ambition judged exceptional New Yorkitude pulp