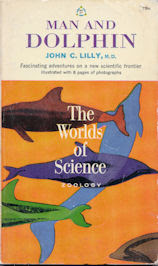 John C. Lilly's Man and Dolphin, first published in 1961, promised that interspecies communication was just over the horizon.  In making that prediction, the book inaugurated our modern image of the dolphin as an intellectual peer to mankind.  All of this is well known and not worth repeating, really.  We still can't talk to dolphins, of course, and increasingly we can't even talk to vast swathes of our own human population, so maybe wanting to talk to everyone and everything is overrated anyway.

The only thing to add about Lilly's dolphin project is some trivia related to the largely repressed Mike Nichols/Buck Henry oddball film of 1973, Day of the Dolphin, in which two dolphins trained to speak English are kidnapped in a plot to blow up the President of the United States aboard his yacht.  Here is what the WikiGods say Pauline Kael had to say about that:

Pauline Kael, the film critic for The New Yorker suggested that if the best subject that Nichols and Henry could think of was talking dolphins, then they should quit making movies altogether.

God bless Pauline Kael, snarkist extraordinaire even before the first Gen-X'er drew an ironic breath.  More trivia about Day of the Dolphin: The movie was originally going to be directed by Roman Polanski, and he was actually in London scouting locations when his wife, Sharon Tate, and friends were murdered by the Manson Family in August of 1969.

What is fascinating in this particular edition of the book, however, is a former readers' inclusion of a shopping list composed in advance of what looks to be an extraordinarily courageous weiner roast.  A scan of the document appears below: 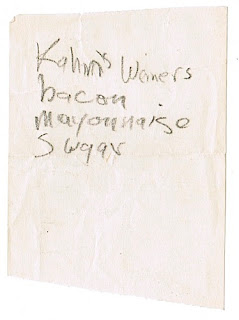 We are left here with two basic interpretative possibilities. Perhaps this unknown reader with an interest in dolphins was merely stocking up on a quartet of diverse and unrelated supplies: weiners (Kahn's), bacon, mayonnaise, and sugar.  But I would like to think this slip of paper is actually a recipe rather than merely a shopping list, the blueprint for a delicacy that we shall call the "Kahn's Bacon and Mayonnaise Sugar-Weiner."   And as I found this book at a local thrift store in Chicago, the Kahn's Bacon and Mayonnaise Sugar-Weiner recipe theory should be seriously entertained, considering this city is notorious for staging a variety of sausage meats in often startling configurations.

Somehow I can see this working.  Perhaps it was even a precursor for preparing what in 1961 promised to be the holy grail of forbidden sausages: the dolphin dog.
Email Post
Labels: advice animals Chicago fortean Inexplicable slightly disgusting