Training manual for all the gals who decided to spend the sixties not having sex nor staying single; or perhaps, a primer for those very same gals if and when they landed an "executive" husband.  From the back cover: 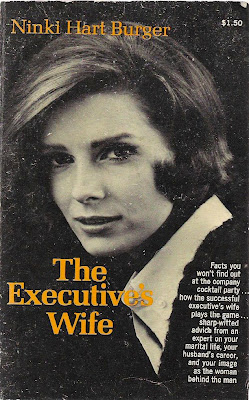 The wife--Asset or Liability?  The verdict often decides whether the man gets the job.  Like it or not, the wife is very much part of her husband's corporate career.

Somewhat remarkably labeled a "business" book, The Executive's Wife explains how to deal with frequent relocations, your husband taking long business trips, entertaining your betters, and keeping the kids quiet so hubby can rest. Additional information is provided on being a "helpmate," "housewife," "mother," and "bookkeeper."  There is also advice as to how one might solve "tension-inducing problems in sex, drinking, and gambling" (his, apparently, not hers).

Pretty standard self-subjugation manual, although I was taken with the following tidbit.  A wife tries to understand her husband's obsessive hobbies.

Vic always has something to absorb him.  The latest is to build a library of classical music by taping FM-Stereo radio programs.  You wouldn't think we could get into a wrangle over that, would you?  But when Vic goes after anything, it's all the way!

"He bought another tape deck so that he could dub one tape on to another and delete the commercials.  Then he decided he wanted each composer's works on separate tapes so that required still more dubbing.  When he wasn't taping music of the air, he was dubbing.  And while he was dubbing, he was setting-up a cross-reference, catalog-filing system."

Soon all Vic cares about is his taping, dubbing, and cataloging. It makes him rude to guests, remote to the children, and late to bed.  What is a wife to do?    This wife, at least, decided it was probably best just to let Vic get it all out of his system and not to complain in the meantime.  But I was struck how profoundly true this passing observation is: men do tend to be obsessed about organizing music, maybe even more so than listening to it. True with iTunes, true even in the days of reel-to-reel dubbing.
Email Post
Labels: 1960s advice cults: real and imagined mind control what girls think about