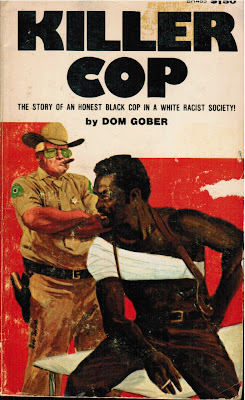 Second book in Gober's (Nazel's) "Black Cop" series for Holloway House, most famous for its titles authored by Iceberg Slim (Pimp, Trick Baby, Mama Black Widow).  This excellent site reviews Black Cop and provides a bit more background on Gober's (perhaps overly) prodigious output for Holloway.  Today we often align all black crime fiction from the 1970s with "blaxploitation," but as the many ads for other Holloway titles suggest, these books were actually marketed as "black experience" fiction.

Detective Jim Rhodes is a black cop on the LAPD, working the narcotics division and trying not to run afoul of a racist police force, city, and country.  In Killer Cop, Rhodes wants nothing more than to get away for a little fishing and hunting in a buddy's cabin up in the mountains.  Unpacking his van, however, he soon discovers that he has a wounded brother in the back.  No sooner does he have his mystery guest bandaged and on the couch, Rhodes is besieged by the killers looking to finish the job on the wounded man.  Much of the book details Rhodes' scheme to retrieve his guns from the van, take out his mystery adversaries under the cover of darkness (Rhodes is also a Vietnam vet, of course), and get the wounded guy to the hospital.  Rhodes is able to save himself but not his wounded stowaway.  So when the local police show up to lay down the law of this racist society, all they see is a black man with a bunch of rifles and four dead bodies on the property.  Hauled into jail, Rhodes' proof that he is LAPD means nothing to these racist county crackers (who, remarkably, though they are probably no further away from L.A. than Arrowhead, act and talk as if they're straight out of Alabama circa 1955.  Please inspect the white cop on the cover--he is clearly modeled after Rod Steiger from In the Heat of the Night (1967)).  It doesn't take much for Rhodes to outsmart the younger, stupider cop, and soon he's on his way to find out what is behind all this violence, an investigation that eventually leads him to the BFF, which in this context stands for the Black Friends of Freedom. 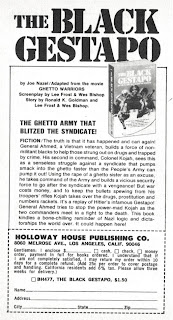 Given Gober's extraordinary output, it's hard not to read Killer Cop as a weekend-long caffeine fueled improvisation knocked out asap for the $500 Monday might bring.  During the drive out to the cabin, for example, Gober's protagonist seems to riff mentally on any and everything that comes through his mind--a way of adding 20 pages or so before getting to the actual plot.  All in all not that great.  Pretty terrible in fact.  But historically, at least, an important counter-narrative to swill like this.
Email Post
Labels: 1970s golden state of mind kickers of ass pulp radicals