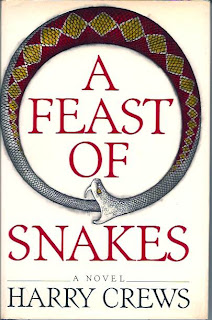 Harry Crews
Atheneum
With Faulkner's Sanctuary as a template, southern writers have been trying to out do each other for years now in writing the perfect novel of backwoods booze-soaked debauchery, most often focusing on unresolved racial/sexual tensions that end up exploding into horrific acts of violence--all of it unfolding in small rural hamlets where the heat and humidity always seem to be at 90/90.  Here Dixie desperation takes the form of  Joe Lon Mackey, who at the young age of 20 already realizes his future will be one long humiliation after another.  Once the captain of the high school football team and undisputed alpha male of the county, Mackey now runs his dad's liquor store in rural Georgia and helps organize the town's annual "rattlesnake round-up."  As the town gears up once again to host a few thousand snake enthusiasts, Mackey must confront his suddenly shitty lot in life.  These humiliations include 1). being married with two kids to a woman he hates while his high school love/lust object is off at the University of Georgia screwing some citified member of the debate team; 2). watching as a younger guy enjoys all the sexual and vehicular privileges associated with being "King Rattler."; 3). having a sister who has gone completely insane and spends all day in her room watching TV.

I read Crews' novel Celebration (1999) a while back and was slightly underwhelmed.  But this is a real corker--horrifying but also poignantly hilarious in places.  I can now see who Joe Lansdale has been emulating for most of his career.