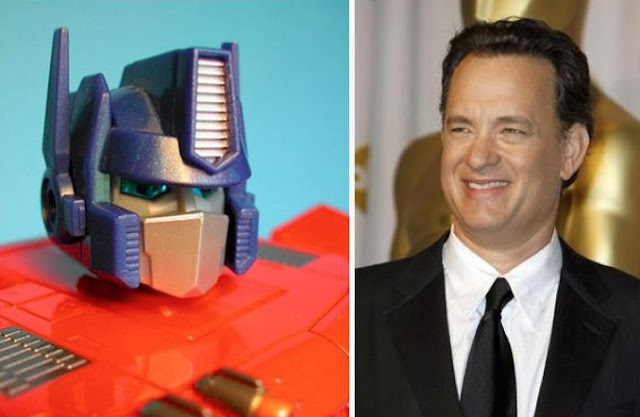 I demand to live in a world where the following is possible.
A sleepy summer weekend with two films opening wide: Larry Crowne and Transformers 3: Dark of the Moon.  No one is particularly exited by the prospects, but having come to expect so little anymore, no one is particularly outraged either.  Middle-aged white guy courts middle-aged white girl.  Michael Bay takes one step closer to generating the most synthetically pure shockwave in the history of the motion picture.
But what if bored cinephiles had access to technology that allowed for an exchange, a transposition, a “Freaky Friday” that could restage two relatively generic films into something more sublime?  In short, I want the ability to switch Tom Hanks and Optimus Prime.  I want to see Optimus Prime courting Julia Roberts in Larry Crowne, and I want to see a gigantic Tom Hanks battle Decepticons in Transformers 3.  Given all the digital wizardry we have access to now, not to mention all the money I have shoveled atop the dying embers of the Hollywood bonfire over the years, is that really so much to ask?  When do my dreams get to come true on the big screen?
With no explanation given whatsoever, a 50’ tall Tom Hanks takes over in the role of Optimus—no armature, no make-up, no digitally processed voice effects, just Khaki Dockers and a plaid short-sleeve shirt.  He fights the Decepticons with the usual wit and modest demeanor of the Tom Hanks we all know and love, apologizing to pedestrians before he throws Skywarp down a busy street, or saying something self-deprecating to Megatron before they battle to the death in Lake Michigan.  I suppose he’ll need to “transform” into something to maintain the preschool wonderment of the franchise—perhaps a trusty Volvo.
But even Tom Hanks can only do so much to polish a giant mecha-turd like the Transformers franchise.  More interesting, I think, would be seeing Optimus Prime in Larry Crowne.  As we open, Optimus has been laid off from his job as head of the Legion of Metal or the Rustless Avengers or whatever the hell he’s been doing for the past 30 years.  Despondent, he is encouraged by his childbots, Subprime A and Subprime B, to go back to college.  There’s some low comedy as Optimus discovers the typical university campus was not designed to accommodate his massive frame—perhaps he accidentally takes out the centuries old colonnade leading to the library or backs-up over the Dean’s new Porsche ("I apologize, Dean Reynolds, but your vehicle was temporarily lost in what I believe your refer to colloquially as the “blind spot’").  Maybe he takes a History class and gets in a hilarious argument with his liberal professor over the necessity of occasionally destroying entire civilizations for the overall good of the universe.  “You will find, Professor Tompkins, that the Torg-bots of Andulus-12 will not respond favorably to your cherished reason and diplomacy.  They are programmed to respect only violence and power.  They would leave the earth a tattered husk adrift in the solar winds before your starry-eyed diplomats could even make it to the spaceport.”   Can’t linger here too long, however, or else we’ll simply become Robot Chicken. 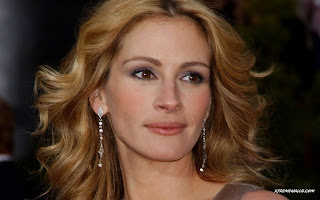 So he meets Julia, sweet, sweet Julia.  At once he is smitten.  And though she is only a fleshy humanoid woman that he might crush with a flick of his phalangeal pulley array, he finds himself strangely awkward in her presence.  Usually confident and loquacious in all situations, he becomes tongue-tied and oddly inappropriate (“Can I assist you in greasing your chassis later this evening, Professor Tainot?  Excuse me, I should not have verbalized my odd longing to inspect the specifications of your skeletal framing.  Perhaps you would assist me in greasing my chassis instead?  Again I must apologize.  I have just now received a software update indicating that chassis-greasing in the human species typically only occurs after the third interface.  I did not mean to offend.”  And so on.  Really, it just writes itself).
Optimus can’t fit on a scooter, obviously, but there’s no need to jettison this scene of romantic joie de Vespa.  In fact, the scene could be made even more profound and meaningful.  “I am afraid my metric tonnage prevents my transport by ‘scooter,’ as you call it; however, I have calculated another option that may prove more feasible.”  And then, for the first time in their relationship, Optimus transforms into his other identity, an extended-cab model 379 Peterbilt truck.  The music swells as Julia Roberts, still idling on her Vespa, looks on in wonder and amazement.  “I invite you to relocate your vehicle to the rear of my trailer,’ says Optimus.  His payload door opens and a ramp descends covered with rose petals.  “Please, Professor Tainot, I invite you to accelerate up my ramp and into my main cargo hold.” Julia is hesitant at first.  Can she really be in love with this strange humanoid student-bot that has just transformed into a Peterbilt truck right before her eyes?  She thought she was too old for love, that she would never love again, and yet….

Julia Roberts revs her engine and scampers up the ramp.
The trailer is pitch black inside, at least at first.  But as her eyes adjust, Julia sees that Prime’s cargo hold contains the riches of a thousand years traveled across a thousand galaxies.  Platinum servos from Kaldar-7; the luminous feathers of a Gorlond harvested from the nests of Outer Torqew; a rare diamond-codex monkey from the Talnasia system.  A beautiful necklace of unknown but dazzling jewels materializes in mid air and then slowly lowers itself around her neck.   And then, quietly, tenderly, a door opens at the front of the trailer.  Optimus has opened the hatch to the sleeping compartment of his extended cab model 379 Peterbilt form.  With a soft flash of light, the standard issue acrylic sheets morph into silk and satin.  A candelabra self-ignites on the bed stand.
There is an awkward a pause, until at last Optimus speaks.   “I am but a simple fighting bot,” he says, his voice noticeably cracking with emotion, “but I know that I love you, Professor Tainot.  Somehow, I feel I have always known you, across the eons, and that we shall be one across the centuries."
Tears in her eyes, Julia advances, tentatively at first, but then with ecstatic joy spreading across her features.   Yes, she loves Optimus too, she can see it now.  She makes her way toward the threshold of the sleeping chamber.
But then a violent shaking knocks Julia to the ground!  The entirety of Optimus’ metal frame seems to vibrate, its hinges and joints groaning.  Julia bounces from one wall of the trailer to the other, as if Optimus were twisting and tumbling through open space.  The trailer door reopens and we see some large, fleshy object begin to make its way into the compartment.  Julia looks on in horror.  What is happening?  What is that thing inexorably advancing into Prime’s cargohold?  “Optimus!” she screams.  “Optimus!  Help!”   But there is no answer, only the inchworm undulations of the strangely organic intruder.
A look of horrific realization steals across Julia’s face.  “Oh my god,” she mouths soundlessly to herself, the camera dollying-in and tilting-up in classic Spielberg fashion.  We then cut to her POV and see what appears to be…..yes, it’s a giant human finger!  And at the tip is a painted fingernail sparkling with pink glitter and the shimmering image of a prancing unicorn.  A second finger appears out of nowhere and suddenly Julia is caught.  She holds tight to her lover’s roll bar, but it is no use, the giant fingers gradually pull her out the back of the trailer.
We cut to a wide shot outside the trailer.  It’s a little girl holding Optimus-as-379- Peterbilt-truck in the palm of her hand.  With the other hand, she deftly extracts a struggling Julia Roberts, tiny and flailing.  But this is no ordinary little girl.  She wears a gingham dress with lace collar, to be sure, but a third eye blinks impassively in her forehead, her bald cranium encircled by four equidistant “goat” horns.  For this little girl is….an alien from another world! 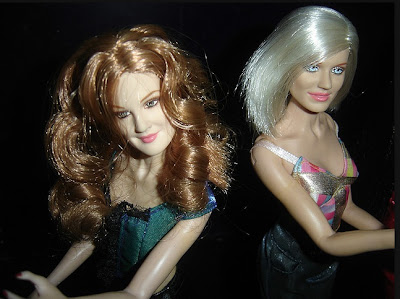 But there is still yet more movie fun to be had.  The camera tracks past the 4-horned girl still immersed in her play.  The mise-en-scene suggests a familiar yet slightly “off” living room—the chairs, lamps, and wall hangings of another world.   As the camera continues moving, we see a series of dolls laid out side-by-side on the carpet.  There is a doll that looks eerily like Amy Adams.  Another resembles Drew Barrymore…Meryl Streep…Megan Fox…and so on.  Finally the camera rests on what appears to be a video monitor of some kind, an alien “television set,” if you will.  An animated commercial appears on the screen.  It shows a little girl playing with dolls, ones that look just like the actresses we’ve just seen on the carpet.  We can’t hear the dialogue, nor could we understand it even if we did—but we see the animated little girl holding a Julia Roberts doll—she bends the doll’s legs backwards, tucks the head into its chest, detaches and repositions the arms.  Suddenly Julia Roberts has been “transformed” …into a canoe with oars!
Dear god, we realize, this is a planet where it is the female of the species that exhibits genital mastery through transformational doll play.
As this mind-blowing epiphany washes over us, offscreen, away from the alien TV, we hear the horrifying sound of bones cracking like broken celery.  Roberts screams,  “Optimus!  Save me!”  But there is no rescue, for we will now fade to black.
Representatives of Micheal Bay should feel free to contact me by email to discuss points and residuals.
Email Post
Labels: Filmed Product Post-Analogue Reality Regressive Phenomena Spectacles of Death Vehicular Mayhem