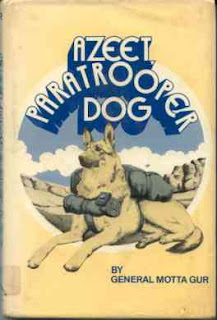 Nashville Nelson
Azeet is a paratrooper dog with only one ambition in life: bite every enemy of Israel right on the ass cheeks.  Billed as a "true story," we follow along as Azeet assists the Israeli army in a series of heroic adventures.  These include:
1. Finding two soldiers trapped behind enemy lines.
2. Rescuing two tourists in the desert who had been waylaid by Arab thieves and left in a cave to die.
3. Raiding an Egyptian beach to find a stranded group of navy frogmen.
4. Helping rescue a tank crew stalled in the desert.
5. Sniffing out marauders crossing over the border.
6. Sniffing out mines under the snow on Mt. Hermon.
It all starts out fairly reasonable enough. Azeet seems to be doing the things a dog might actually do--finding scent trails, hunting down missing people.  But by Chapter 3, when Azeet puts on scuba gear and then single-handedly knocks out an Egyptian sentry (of his own initiative apparently), you have to think a line has been crossed between true dog story and elementary school propaganda. If you don't want to go back to the pre-67 borders and love dogs, this book is for you.
Email Post
Labels: 1970s animals kickers of ass politics