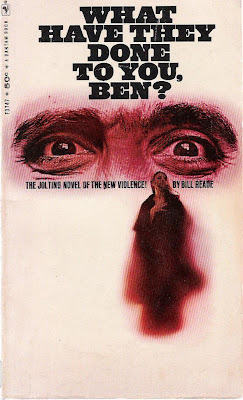 Young Jamaican boy out fishing on a British estate is shot and killed, maybe by accident or maybe in cold-blood, by one of three poachers out looking for pheasants (poaching tip: the secret is to go out the night before and leave bird feed soaked in liquor everywhere-- the next day, the birds are all drunk and you don't even have to shoot most of them).  After the boy is killed, the three poachers hurry to a local pub to sell their pheasants so that they can get some quick cash and lie low for awhile.  But when a cop shows up, the pub owner rats the three out, which leads  to more shooting and the death of the pub owner, his wife, and the cop.  Also, one of the poachers gets run over by the van during their get-away.

Now we're on the run with Ben and Sam, the two remaining poachers.  Sam wants to go off on his own, but Ben demands that they stick together until the heat blows over.  And you listen to Ben, because he's the one who shot all five people in the last 24 hours and still has the shotgun.  They camp out for a couple of days in a remote field--but then one morning Sam kicks Ben in the throat and then walks back to his house in the village.  For some unknown reason, there follow a few domestic scenes with Sam and his wife.  He hides in the attic for about five pages and then gives himself up.  But neither Sam nor his wife are heard from again, so really, what's the point?

Back to Ben.  Turns out Ben has amazing survivalist skills, and so he goes to an abandoned country estate and creates an elaborate bivouac out of weeds, and sticks, and moss and similar nature stuff.  His goal is to live there unobserved for a couple of months and then sneak up to Scotland where apparently it is very easy to get hydroelectric jobs with little to no questioning.

But then a novelistic intervention!  We change from third person to first person to pick up the story of Sarah, a middle-aged police superintendent who dated Ben in the days leading up to WWII.  He was the love of her life and she hasn't so much as kissed a man since he left to go off to war and then mysteriously vanished some twenty years previous.  The police want to know if she has any clues about where Ben might go or what he might do.  She says she doesn't, but then immediately remembers an old country estate--now long abandoned-- where they spent their last night together.  Bingo!

From here we jump back and forth from 3rd to 1st person as the noose tightens around Ben.  I particularly enjoyed a chapter where Ben, tired of eating trout everyday, lures a squirrel into his bivouac and then snaps its neck.  We're supposed to think this makes him seem more crazy, but really, who could eat trout everyday for 2 months, especially if he possessed the skills to charm squirrel meat right into the pan?

After one unproductive trip to the old manor, Sarah returns again once she knows the police will be there in three days to conduct a thorough search.  She finds Ben and they do their best to catch up for the past 20 years.  But then comes the inevitable question about Ben and the murders:

"What have they done to you, Ben?" Sarah asks.

Turns out Ben was in some super secret British paratrooper force during the war.  Captured in Holland, he was taken to a hospital/jail where the Nazis trained young interrogators in how to torture people for information.  Even though his captors knew Ben didn't have any real information, they nevertheless told the Nazi students that he did--and so Ben was mercilessly "interrogated" for three months and then sent to a concentration camp.

After the war, Ben had come to realize he hated all of humanity--Nazis, British, Americans--everyone stinks!  So he turned to a life of crime and isolation, leaving behind his pre-war identity entirely.

Sarah tries to convince Ben to give up, that he's sick and doctors will cure him if he'll just turn himself into the authorities.  But Ben is convinced they will shoot him on sight.  But Sarah keeps pushing her argument.  When that still doesn't work, she gets control of the shotgun and marches Ben at gun point toward the advancing police line.  Everything's going to be alright, she assures him.  But then a local dimwit, still incensed about the pub murder, runs into the field with a pistol and shoots Ben three times in the gut.

"You promised me they wouldn't shoot!"  I nodded, tears running down my face, dropping onto his face.  "You promised, you bitch," he said, and then he died.

Moral: Men should always trust their own judgment when it comes to possibly getting shot.
Email Post
Labels: 1960s has ambition psychokiller pulp squirrel UK