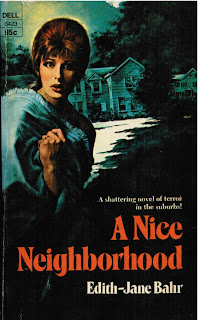 Young wife and mother recently relocated from Manhattan to a Jersey suburb called "Robin Hood Dell" (or as she calls it, "Dum Dum Dell) is up late one night feeding her newborn daughter.  She just happens to see her neighbor in a flimsy negligee letting a strange man out of the back door.  Oo la la!  The same thing happens the next night.  Oo la la again!  After the third night, the neighbor is....dead!

Must be the jealous husband, right?  Nope.  On the fourth night, he's dead too.