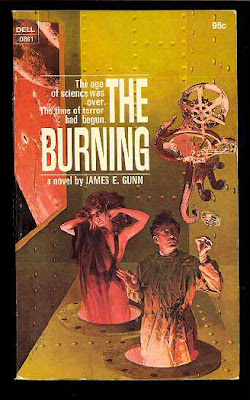 For professorial types, this starts out as the greatest novel ever written.  John Wilson, brilliant sociologist and man of academe, drives to his midwestern campus one night only to see his university in flames.  An angry mob, stirred up by a political movement called the "Lowbrows" and under the direction of an opportunistic U.S. Senator, has decided to put the "eggheads" out of business once and for all.  Wilson feared this day was coming.  Slowly but inexorably, the people had been coming to mistrust intellectuals, especially after the Senator's inflammatory hearings at the House Committee on Un-American Academic Practices.  One by one the colleges begin to burn...
Wow. Sign me up. What a prescient channeling of the Palin/Santorum regime of 2020. It's the future, ripped from today's headlines. No Republican currently running for President will admit to believing in evolution.  Soylent Green is people, people!
Unfortunately, from here the book becomes more a simple "man on the run" story as Wilson must elude the Lowbrows and make it to New Orleans.  Rumor has it that other less stupid countries still value science and learning, albeit in a very restricted and utilitarian way.  As Wilson tries to stay one step ahead of the lowbrow menace, he laments that sociology never achieved the scientific rigor of chemistry, physics, and other hard sciences.  If it had, he thinks, perhaps this could have all been avoided.
The Burning isn't really a "novel" so much as three long stories involving Wilson's plight, interesting for the historical moment of each installment.  Part I, in which Wilson finds himself a hunted man on the run from mobs and Congressional idiots, dates from 1956--right square in the middle of Cold War anti-intellectualism and fears about mass cultural decay.  Part II, in which a drugged John Wilson finds himself on trial (the Senator takes a page from Hitler's book and blames the eggheads, led by Wilson, for burning down their own university to garner public sympathy), dates from 1969 and the "hippie" assault on university order.  Part III, in which nameless pilgrims who still remember some of the witchcraft of the old days (i.e. science) wander the now feudal, superstitious, and generally stupid remnants of the United States, appeared in 1973.

Sociology returns with a vengeance in this last section as the pilgrim and his pilgrim girlfriend sample a few different civilizations in our stupid future.  They hang out with some farmers, who seem generally mellow.  Then there are the "Neo-Scientists" who live in New Pittsburgh and still have the witchcraft of elevators.  Then New Pittsburgh is burnt to the ground by the Luddites.  The pilgrim learns that New Pittsburgh can only work if it has access to slave labor, whereas the free-ranging warrior/raider life of the Luddites only works with the women enslaved.  In search of wisdom, the pilgrim couple enters an old church where it is said "the truth" resides.  Just when you think Gunn is going to cop out and go all Christian on you, however, a button is pressed and the church turns out to be a spaceship that blasts off into earth orbit.  A voice tells our two agrarian pilgrims that their final test is to figure out how to use all the witchy science stuff in the capsule so as to make it over to a space station orbiting the earth.  They figure it out and are greeted by...John Wilson!
Email Post
Labels: 1950s academe evil academics sci-fi wingnuts