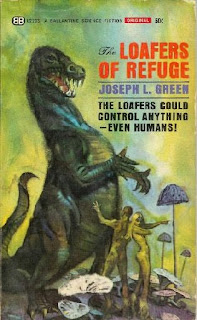 Joseph L. Green
Ballatine Books
In the future earth is a shit-hole (surprise!), so bad in fact that all of New Zealand is now covered with 80 story apartment buildings and people all over the globe are drafted for off-world service.  On the planet Refuge, off-worlders grow peanuts to feed to "fatbirds" that are then slaughtered and teleported back to Earth.  Main adversary on planet is the dreaded "flying cat."  Story centers (somewhat) on the first human born on the planet, Carey, who heavily identifies with the planet's indigenous population, the Loafers.  Humanoids covered with a soft, downy fur, the Loafers survive by "controlling" animals telepathically (but humanely). Overall a rather disjointed series of adventures involving human/Loafer interaction.  Extended segment in which a young human girl with telepathic powers befriends a plant and learns the secret of live teleportation.  Eventually one Loafer wonders if all the humans coming to Refuge is such a good idea.  Should be of interest to anyone still sad they can not live among the Na'vi in Avatar.
Email Post
Labels: 1960s animals mind control sci-fi