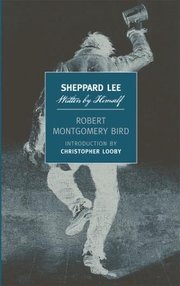 Robert Montgomery Bird
NYRB Classics (2008)
A truly odd and interesting novel from antebellum America.  Through laziness and neglect, Sheppard Lee loses the farm he inherited from his father. Thrown off his own land and with no place else to go, he fortuitously discovers that he has the power of transmigrating his soul into recently deceased bodies.  But he can find neither rest nor happiness as he moves through a series of diverse bodies and social situations in and around early 19th century Philadelphia.  Wonderfully deadpan and ironic in places, it reads very much like an American Thackeray.  Said to have been an influence on Poe ("The Gold Bug"), Melville ("Israel Potter"), and Stowe ("Uncle Tom's Cabin") in its day, the novel appears to have been all but forgotten in the 20th century.  This new edition is the result of efforts by UCLA English Professor Christopher Looby to bring the book back into print. He also writes the introduction.
Email Post
Labels: 19th Century humor nyrb semi-legit