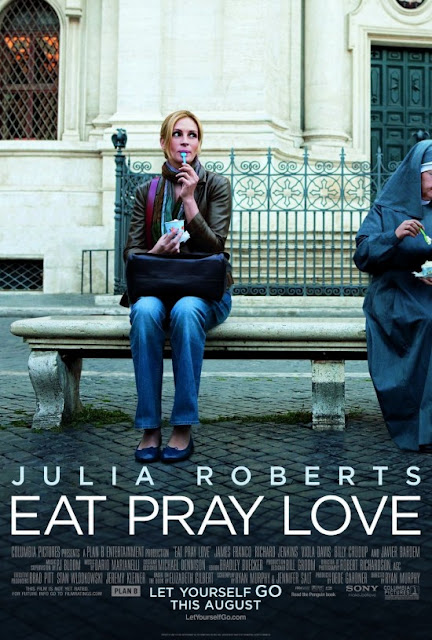 Let us begin with the frame, which as we know is never neutral.  We see Julia Roberts at a distance, surrounded by a series of architectural markers that tell us she is in Europe—cobblestone, marble, stained glass, intricate latticework.  To the right a nun has been cut in half, allowing her to anchor the image in Italy while not distracting from Roberts as the focal point of the composition.  Here one of America’s most iconic actresses basks in what Barthes once termed a state of Italianicity (a fact already known to the many readers of Eat Pray Love).  By framing her in a long shot and surrounding her with quaint signifiers of the “old world” (like Catholicism!), the shot better foregrounds Roberts (and her character) as an exemplar of white, urban, privileged, modern, American femininity.  Her attire is fashionable yet practical: ballet flats, jeans, a tasteful leather coat and colorful scarf.  In her lap sits a functional but still stylish satchel, the type of “backpack” an upscale tourist takes while “bumming around” Europe (during extended day-trips in between nights at the Four Seasons).  Her highlighted hair is pulled back, both for practicality and in respect for the apparently “holy” venue where she has chosen to rest and contemplate for a few moments.

Surrounded by the sober charm of this European mise-en-scene, Roberts consumes a gelato, holding the blue plastic spoon in such a way as to draw attention to both her mouth and the confectionery itself.  Note too that half-nun has been positioned so that we see she is also enjoying a mid-afternoon treat, suggesting a universal “sisterhood of the sweets.”   The ideology of gender tells us that all women--be they brides of Jesus or globetrotting cosmopolitans “finding themselves” courtesy of a $200,000 book advance--love ice cream, chocolate, and other decadent treats!   It is, dare we say in the presence of a nun, so “sinful” to partake of such a caloric indulgence, a stolen pleasure of sensual delight. (“My no carb left behind experiment” she announces in the trailer. “I’m having a relationship with my pizza!”) As the nun is older and celibate, she simply shovels the gelato into her mouth in ordinary fashion.  But as this is a true “indulgence” for Roberts who, even though she is clearly coded here as alone but independent, is ever mindful of how such a momentary excess might impact her figure, even as she is—as the tag line dares both her and us—letting herself  “go.” 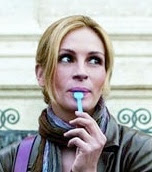 Thus the ambiguity of her expression, the focal point of the overall composition.  It seems slightly sexualized and naughty as she leisurely plays with the spoon, and yet also a bit coy and perhaps even awestruck.  What is she looking at so furtively?  Is it a masterpiece of Italian sculpture across the square?  A whimsical Italian street scene (perhaps an organ-grinder chasing his mischievous monkey)?  Or is it a man, a handsome local or a fellow tourist, also on a journey of self-discovery?  A man who, in mere seconds, will soon take a seat in one of the two strategically symmetrical spaces to either side of her?  A man who understands and shares the delight of simply wandering through the city with no particular plan, taking in the theater of life and then stopping for a few moments for the simple pleasures of a tasty gelato.  They will flirt.  Perhaps it will come to nothing.  But then again….

Whatever she might be thinking about or looking at, her expression tells us she is “in the moment” and taking “time for herself.”  All of this—the streets, the buildings, the nuns, the art, the food, the jet fuel—exists only for her at this magical moment.  As she says in the trailer, “I want to go someplace where I can marvel at something.”  And so her life is renewed, not by considering her relationship to the social world around her (at home or abroad), but instead in allowing her stores of surplus wealth transform other lives and cultures into a vast stage for her looking-inward, getting “in touch” with who she really is, restoring her “appetite” for life. 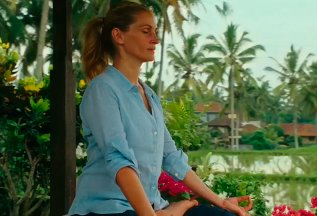 Soon she will be on an ashram in India, turning that diverse and storied civilization into an orientalist signifier of higher “spirituality,” using her advance money from Viking to take a yoga “field trip” that will be the envy of every salon on both Rodeo Drive and Fifth Avenue (three months of meditation and exercise to lose all those calories from Italy!).  And then on to Bali, because Bali is even more of an Orientalist mystery to Americans than India—perhaps she will find love there, or God, or enchanting perfumes and spices, or a really great diet/exercise regimen.

Eat, pray, love.  In the end, that just about says it all, doesn’t it? The body, the spirit, and our most cherished relationships—what more is there to life, especially for those who have the luxury to worry about the palate, self-actualization, and romantic love? Perhaps she will take a candlelight bubble-bath when she gets back to the hotel this evening, eating a few bon bons as she leafs through the pages of the Bhagavad Gita. 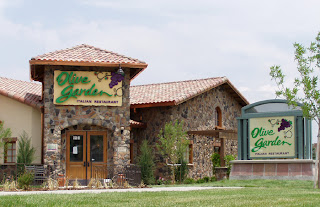 Look for the sequel next summer--Digest, Work, Exist-- in which our heroine goes broke and loses her New York penthouse, forcing her to move to the Midwest where she experiences the magic of Italy by working at a local Olive Garden, finds God in a $1000 scratch 'n' play lotto card, and ends up marrying the father of her child so that she and the baby don’t have to keep living in that shitty one-bedroom by the Interstate.
(with apologies to Godard, Gorin, and Fonda)
Email Post
Labels: Celebrity Bullshit Fatal Strategies Filmed Product Normalization