There is a commercial now in heavy rotation that is well worth complaining about.
The spot comes from Traveler’s Insurance and is apparently titled “the Watering Hole.”  As an insufferably cheery band plays a new take on “We’re Going to the Zoo,” various links in the African food chain frolic around the water in peace and harmony.  Zebra and lion drink side-by-side.  A meerkat, fresh off inflating his Q-scores with Meerkat Manor, dives into the pool from atop his friend the giraffe. “When you’re not worried about potential dangers, the world can be a far less threatening place,” observes a human, probably from a safe distance.  And then the tag line: “Take the scary out of life.”   It is a vision of the world straight out of a children’s pop-up book, or that conflation of Isaiah that eventually became a Genesis album.
Recently the term “ideology” has been starting to come back into circulation after a prolonged exile atop the scrapheap of structuralist naivete.  And it’s about time, I say, as the current media environment is practically begging us to reengage in a didactic and even painful program of radical demystification, one that might possibly strain our friendship with television and its audiences, but is nevertheless crucial in our duty to keep alive the flame of critical inquiry in the dark days that lie ahead. 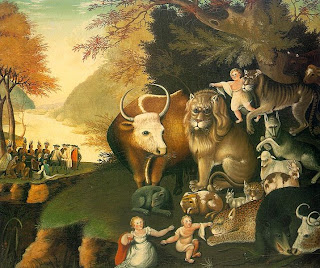 As a rule of thumb, anytime you see animals doing something other than eating, sleeping, or shitting, ideology is most likely at hand.  In this case, we might begin by asking how exactly this scene of animal harmony came about.  Either Jesus really has returned and brought with him the fabled “Peaceable Kingdom,” or an economic miracle of some type has removed all thought of material necessity from the Veldt.  Perhaps a cargo plane accidentally dropped a huge mountain of K-rations nearby and all the animals agreed, given this new plenitude, to quit wasting all their time and energy chasing and eating each other.  In either case, secular or spiritual, these animals have clearly achieved some form of socialist, perhaps even communist paradise.  With all of their needs now apparently all equally met, these beasts are able to cooperate in a new golden age of swimming, grooming, and self-actualization (although let’s check back, shall we, when the pond begins to evaporate).
Travelers Insurance would have us believe we too can live in blissful peace among our fellow citizens if only we buy their product, thus taking “the scary out of life.”  But consider what “insurance” actually is – a commodity we purchase that (we hope) protects our other possessions from theft and/or damage and ourselves from “liability.”  Our “scary world” is linked to economic anxiety, where “eat or be eaten” has been replaced by “sue or get sued,” and where at any moment an economic disaster can utterly destroy us both socially and psychology. While leopard and antelope may have worked it out, we still live in a “dog eat dog” world of unrelenting alienation harnessed to the machinations of property and power—with no “safety net” and an audience that is increasingly eager for neighboring nations, states, counties, and even zip codes to drop dead. 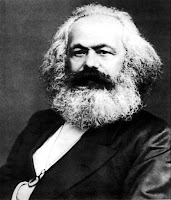 Rather than examine the foundations of this terrifying system (okay, I’ll say it: capitalism), we are instead encouraged here to inoculate ourselves from its horrors through insurance.  But while this promises to “take the scary out of life,” insurance only buries us deeper and deeper into the very system that enslaves us.
The dancing animals are happy because somehow they’ve found a way to abandon exploitative relations of power (as in, I need energy and so now I will eat you).  They don’t own anything and are free to pursue whatever activities they see fit.  The only way for humans to achieve this would be to abandon relations of property and power and live in true collectivity—something that is of course antithetical to the interests of private insurance, which at best serves as a kind of precarious battle-shield in ugly disputes over property, damages, and liability.  And, as anyone who has ever filed an insurance claim knows, a policy doesn’t take the “scary” out of life—it becomes just one more commodity to worry about in that we know our carrier will not let us jump off its head meerkat style into a cool, refreshing pond, but will most likely fight us tooth-and-nail to minimize the payout.
It’s the classic ideological switcheroo:  rather than question why the world has to be “scary” in the first place, buy another product that will give you the illusion of making it less scary.
All in all, I greatly prefer the Progressive Insurance ads featuring break-through corporate icon “Flo,” the ebullient insurance clerk now giving the Geico lizard a run for his money.  These ads feature various insurance shoppers wondering around what looks like a Walmart in limbo, a white room filled with shelves of insurance commodity boxes.  Ever upbeat and helpful, Flo guides them toward the appropriate coverage. 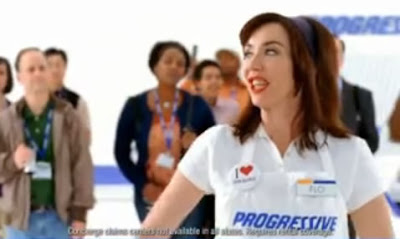 The connotations should be clear:  These poor idiots are all dead and now have to buy insurance in heaven, perhaps to protect their cloud from lightning damage or in case they accidentally rear-end Gabriel’s chariot on the expressway.  Worse yet, they probably died without having sufficient insurance back on earth, thus leaving their families destitute.  The message: buy this insurance now before it is too late; in fact, buying our insurance will not only protect your property, it might even make you immortal should you actually be in a horrible accident of some kind.
Associating insurance with Catholic limbo is a brilliant strategy as not having earthly insurance is very much like living in a state of dangerous purgatory.  Sure, your house probably won’t flood in the next year…or two…or five.  But you never know, at any moment fate might intervene and all will be lost.  Best to give “Flo” a call now and “save” yourself before occupying the property of the damned!
Now watch this excellent video, which uses animals in a way much more befitting our current historical predicament: