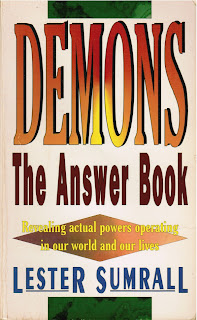 Satan is real.  These are the end times.  The Devil seeks to dominate America in particular.  Demons prowl around in search of bodies to occupy.  Occasionally horses and dogs host demons, as can be seen when they inexplicably "go berserk."  Crime = demon.  Adultery = demon.  Sodomy = demon.  Depression = demon.

"Evil spirits seem to be drawn to the cities.  Since they apparently are not satisfied until they dwell within a human body, they congregate in places where humans are numerous.  Their strength is most evident in cities that, for some reason, have little of the light of the gospel.  Paris, New York City, Hollywood--these cities I believe are under the devil's ruling power."

Author Sumrall came to believe in demons after seeing a girl in the Philippines who manifested spontaneous "bite marks" from some invisible being, which proved to be a demon.
Email Post
Labels: author demonstrably insane mind control occultism Paranormal religion Satan