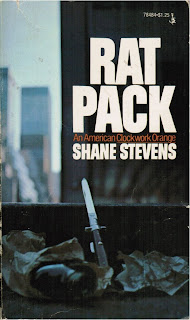 Author Stevens covers himself by opening the book with a poem from Langston Hughes to signify his sympathetic perspective on all the mayhem, and he also makes a few nods toward contextualizing the extreme poverty, poor education, and total lack of opportunity facing his protagonists.  Still, the book reads for the most part as borderline racist exploitation, portraying the "rat pack" as lacking any shred of empathy, self-reflection, or conscience as they beat, stab, rob, and molest their fellow citizens.  A reminder of the "bad ole days" when NYC was so supremely screwed-up both in reality and in fiction.

It turns out Rat Pack is a fairly rare and sought after book.  A basic reading copy in paper appears to go for about $30.  So if you see one at Goodwill, buy it.  You don't have to read it, and if you feel bad profiting on a book designed to scare white people shitless by implicitly, hell explicitly, equating black youth with the vermin that infest their Harlem tenaments, you can always give the money to the charity of your choice.
Email Post
Labels: 1970s j.d. New Yorkitude pulp