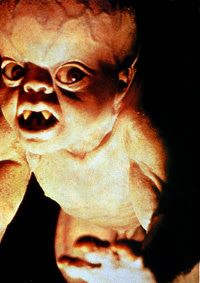 Perfect's Annals is one of the earliest volumes to collect a number of case studies involving "maniacs," "lunatics," and the otherwise "insane." In the midst of Perfect's meticulous descriptions of symptoms, treatments, and outcomes is this rather extraordinary "whopper," which he presents in a footnote as absolutely "true"--even though he did not witness it personally.
A physician notes "that he himself knew a case of a child having been absolutely born mad.  A woman of about forty years of age, of a full and plethoric habit of body, who constantly laughed and did the strangest things, but who independently of these circumstances enjoyed the very best health, fell about twelve or fourteen years ago, after a severe and tedious labor, in which she was delivered of a daughter, into a a very great weakness of understanding.  This gradually increased, and during the last war she one day entered the forest with her daughter, and destroyed her in a shocking manner.  A short time before her husband's death, she became pregnant, and on the 20th of January 1763, was brought to bed without any assistance, of a male child who was raving mad.  When he was brought to our workhouse, which was on the 24th, he possessed so much strength in his legs and arms, that four women could at times with difficulty restrain him.  These periods either ended with indescribable laughter, for which no evident reason could be observed, or else he tore in anger every thing near him, clothes, linen, bed furniture, and every thread he could get hold of; and we durst not leave him alone, or he would get on the tables and benches, and even attempt to climb up the walls; afterwards, however, when he began to have teeth, he fell into a general wasting, or decline, and died!
Email Post
Labels: Archeology Bio-Horror England Psychosis