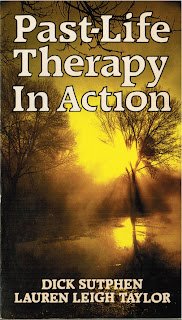 Dick Sutphen and Lauren Leigh Taylor
Valley of the Sun Publishing
Your life is a mess and here's why.  You operate according to a certain "viewpoint," one established either in this life or, more likely, in a "past-life."  Sharon doesn't want to have kids.  Explanation: "As a nanny in 1800s England, Sharon looked after the seven-year-old daughter of a wealthy family.  When the child died, the mother had a nervous breakdown and never fully recovered.  The father became sullen and withdrawn."  Howard thinks he's destined to become a big name in Hollywood.  Why?  "He spent his life seeking money and notoriety as a writer.  Just before the publicatio of his first book, he died."  And so on.  A mix of Hinduism and Freud presented as the transcript of an unfolding seminar.  What's the point of it all?  The authors can't say what might happen in the future, but getting your past-lives in order will at least make you less screwed up in the here and now.
Email Post
Labels: author demonstrably insane cosmic crap mind control Paranormal religion