This book made Warnke a star on the Christian lecture circuit back in the 1970s, notoriety that he eventually converted into releasing a series of evangelical and, incredibly, evangelical "comedy" records on Waco's Word label in the 1980s.

It is the allegedly autobiographical story of Warnke's induction and rise through the ranks of American Satanism (culminating, of course, with his ultimate conversion to Christianity).  The horned-one gets Warnke through the usual bag of tricks, taking a scruffy freshman at San Bernardino State and drawing him in with easy drugs and easy hippie chicks.  At first Warnke is just in it for the kicks, but the Satanists see management material in the young man, and before you know it he's being groomed to take over as "master counselor" for his coven/region. 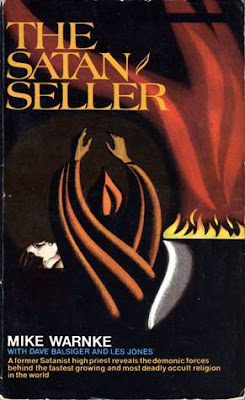 There is the usual profaning of the Eucharist (borrowed from J. K. Huysmans' foundational work in the genre, La Bas [1891] ) Some of Warnke's innovations include killing cats and squeezing their blood out over naked women on the alter and a finger guillotine that allows enthusiastic worshipers to offer their pinkies to Lucifer (after everyone in the coven has had a chance to nibble on it, of course).

But mostly, like everything else in American life, being a Satanist seems to involve attending endless meetings and annoying conferences.  Warnke has to fly to Salem for a recruitment strategy session--to New York for ritual indoctrination training--to San Francisco for a general conference in occultism.  Throughout the story, Warnke implies that a whole other layer of very important Satanists observe and supervise from above--giving their underlinings drugs, women, and rent money, and then moving them to take on greater responsibilities when they have proven themselves.  We know these people are higher up on the Satan-chain because they tend to be better dressed and arrive in Lincoln Towncars.

Things are pretty sweet for Warnke--the Satanists pay his rent, give him all the speed and heroin he could want, and supply him with two willing hippie girls to serve as concubines/Girl Fridays.  But then he goes too far. After introducing a new ceremony where a woman is grabbed at random off the street and forced to participate in a "fertility" ritual, the higher-ups determine he is a loose canon and a threat to their security.  One day, his hippie helpers give him a "hot shot," and before he knows it, he has been dumped nude in front a public hospital.  Thus ends Warnke's rise up the devil's corporate latter.

Luckily, Jesus and a navy drill sergeant straighten him out, and in the last third of the book we follow Warnke's attempts to rectify the evil he has brought into the world.

It's a great story.  But, like so many of these tales of a nation besieged by scheming, secretive Satanists, it turns out none of it is true.  As Warnke's fame grew, more and more people came forward to claim he made most if not all of it up.  Having already been burned by a number of other false-Satanism stories, Christian publication Cornerstone launched an investigation and determined that Warnke's account of speed-freakin' cat slaughterers unleashing demons in the high desert was a fabrication.
Email Post
Labels: 1960s 1970s 666 cults: real and imagined golden state of mind hippies LSD mind control musical evil occultism Satan