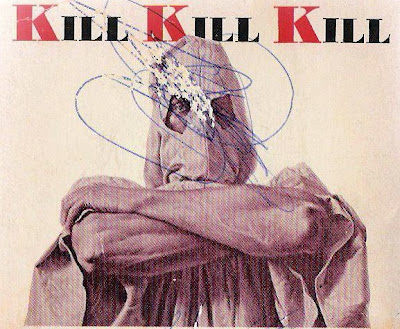 Grease up the pigs and slather the grits, Mary Lou, we're going down to Dixie. Dirty, dirty Dixie.  Dirty, dirty racist Dixie, home of the Ku Klux Klan, in a story that could only be told by... a Welsh sailor.

Sources inform me that Bill Meilen was a Cardiff-born actor who worked on British television during the late 50s and through the 60s.  He later did a lot of TV work in Hollywood, including roles on Battlestar Galactica (the second one), Kingdom Hospital, and Lonesome Dove.  In between, he wrote a fair number of pulpish novels.  His first book, The Division (1967), is apparently the most celebrated, a semi-autobiographical account of Meilen's time in a Welsh borstal as a teenager.  The Bull-Pen appeared two years later, retitled and re-covered for the U.S. market as KKK.

To tell the story of the Klan's insidious influence in the modern south, Meilen makes the somewhat counter-intuitive choice of placing a Welsh sailor at the center of the action (you have to admire the chutzpah. Imagine writing a novel where an American longshoreman goes to London and brings an end to the Brixton Riots).   Bill Hogan of Cardiff goes ashore in an unnamed port in an unnamed state on the Gulf Coast (but let's face it, it's either Alabama or Mississippi).  Coming back from a cathouse, Hogan happens upon four Klan members beating up an elderly black man for walking through the "white" part of town.  When Hogan intervenes, he ends up getting thrown through the window of a dry goods store and taking the rap for merchandise that goes missing within.  While in jail, he befriends a towering Native American who becomes his ally, a la Cuckoo's Nest, against the other racist Kluckers in the cell. Then it's just a matter of time waiting around until the Klan gets what's coming to them. 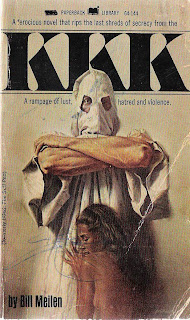 As one might expect of a novel written in this era by someone from across the Atlantic, Meilen makes little distinction between the Klan and southerners generally.  At the very least, everyone here is an idiot.  After Logan is thrown in the tank, no one can understand his accent, nor do they know where Cardiff or Wales are, all assuming it's just another place up in that "librul nigra-lovin' Jew Yankeeland." Meilen also takes a stab at writing southern dialect, resulting in words like this:

The copy I read is particularly remarkable, however, for the incredible violence visited upon the back cover (up top).  This detail of the Klansman has been repeatedly stabbed between the eyes with a pen, and then defaced a little with blue ink for good measure.  There is a similar stab and slash motif a couple times in the text, suggesting some previous reader reached the boiling point more than a few times and let fly with the Bic.  This is all made even more interesting by the back title's demand to "Kill, Kill, Kill," a seemingly obvious attempt to reframe the true meaning of KKK turned here into an exhortation to murder the Klansman himself.
Email Post
Labels: 1960s criminal behavior dixieploitation radicals truly tasteless UK