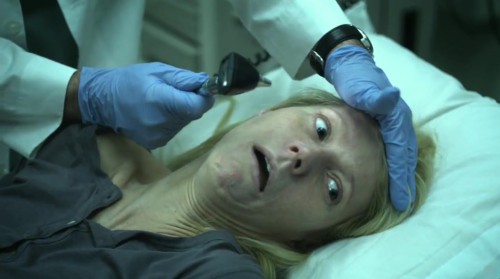 First of all, kudos to the sadist at American Airlines who programmed Contagion (2011) as the only viable option on the eastbound transatlantic flights this month.  Just what a person wants to see after being shoehorned into coach for six hours of hermetic ripening--a film about a clumsy bat almost taking out half the world with a horrible mutant virus, all because said bat couldn't fly and eat a banana at the same time.  Way to go, stupid bat.  Watching Contagion amid all the coughing and hacking and sweating was like trying to make a birdhouse in shop class while the teacher screens the Saw films back to back.  But it was either that or Crazy Stupid Love  (2011), so there you go.

From what I understand, many have celebrated Contagion because Gwyneth Paltrow dies a ghoulish death in the first ten minutes.  This is probably very mean and unfair to Ms. Paltrow, who is quite possibly a nice person in daily life.  But it does raise an interesting question: why do so many people dislike Paltrow?

I think we can isolate four interrelated factors:

1.  She named a child "Apple" because
2.  She married a "rock star," which is exactly what you'd expect
3.  Of someone who has gestated in the designer womb of Hollywood her whole life and yet
4.  Still had the audacity to play a hard-scrabble C&W singer, even when country singifying is
the last show-biz job available to Red State folk who have actually eaten gravel from
fighting in a bar parking lot.

Still, credit where credit is due.  It is not every well-known actress who would be willing, not only to "pull a Leigh,"  but to also have her skull opened up with a bonesaw and her scalp and hair peeled off like a fuzzy grape.  This type of role is typically left to an aspiring starlet who calculates that the shock value of showing a little skull in her film debut will open more doors than it closes--and besides, it's either that or a day's work as one of Steve Carrell's failed dates in Crazy Stupid Love, so there you go again.

One can only imagine what Soderbergh was thinking as he framed this one up in the view finder (or perhaps it was the B-unit. Interesting DGA question: who is typically tasked with shooting scenes involving inert corpses? [Keanu Reeves joke goes here]).  "Boy, this is awesome, I got one of my famous actor friends to let me peel her scalp off in close up!"  And it is awesome, precisely because of Paltrow's "star power" (or for those who remain skeptical and/or irritable, "unavoidable familiarity as an icon in mass circulation despite any apparent market demand). 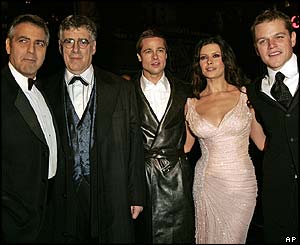 But the undeniable impact of the Paltrow autopsy scene also foregrounds what has become the most insufferable aspect of Soderbergh's "big film" Hollywood work: the suffocating over-abundance of A-list stars who are cast for no apparent reason other than Soderbergh knows them and can get them.  I'm not the first person to say this, clearly.  It's gotten to the point where the ongoing Oceans Infinity series has become like paying some form of symbolic tribute--regular Americans herded into theaters and netflix queues to bear compulsory witness to just how fabulous it is not to be a regular American.  I suppose the Oceans films could be defended as an effort to bring back the "glamor" of the old Hollywood star system, but that would assume "star" means the same thing now as it did in 1935.  Let's face it, now that everyone perceives themselves to be uniquely special and yet unfairly screwed in everyday life, no one has the time or inclination to watch a celebrity circle-jerk every 16 months.


Even if the celebrity jumbo-pack makes some sense in the Oceans films, however, it makes absolutely no sense in Contagion; in fact, it actively undercuts the film's potential impact.  Contagion is barely a story in the first place.   Scott Z. Burns' script opts for such a well-researched and reasonable account of a global epidemic that the viewer meets most of the plot developments with only a nod of familiarity: "People fighting over MREs thrown out the back of a truck? Yep, I could see that happening.  Officials exploiting inside information to protect their loved ones?  Sure, not surprising.  Vaccine shortages? Yep, most likely. "  For this sprawling ensemble piece to work, especially given its rather dispassionate and even wholly predictable docudrama treatment, it needs a cast of unknowns, fame-ciphers that can actually become the everyday, real-life victims caught up in this very plausible global disaster.  What it doesn't need is Matt Damon, Kate Winslet, Jude Law, Elliot Gould, and Laurence Fishburne to remind us over and over again: it's only a movie. All that's missing is George Clooney as the moody epidemiologist who, estranged from his daughter and living in an emotional vacuum, volunteers to wander off into the Chinese jungle in search of even more feverish, sneezing bats.

In fairness to Soderbergh, this is probably more a celebrity problem than a directorial one.  Celebrities like to be in front of cameras--it's just their nature.  And by all accounts, Soderbergh makes them feel good about themselves and their performances, so perhaps these celebrity-stuffed opuses stem less from the director flaunting his connections than from his inability to say no to people who live closer to the ocean than him.

But I have a solution to all of this.

At this point in the cinema's history, I think we can agree that most films would benefit from a cast of unknowns, as least any film that is making a bid for dramatic realism/naturalism.  The star system had its place many decades ago, certainly, but today it is simply incompatible with whatever vestigial powers and patience audiences have left for "suspending disbelief."  Also, there are so many more people today struggling to be famous that I believe we have an obligation to move talent through the system a bit faster.  So here's how we do it: 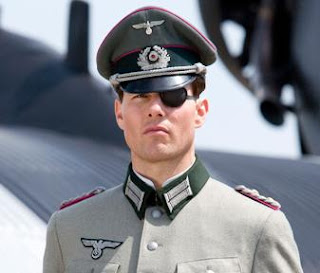 Here's how it works:  An actor is allowed to earn 100 million dollars in fees from appearing in film and television (monitored by an objective accounting firm--perhaps a SAG division of Price Waterhouse).  After hitting the very generous mark of $100 million, said actor must from that point on PAY to appear in any subsequent film and television productions (and, just to be safe, this "pay to play" rate will be double if said actor gets an inkling to sing or rap).  There might be some room to negotiate this fee depending on the amount of screen time and the overall prominence of the project, but the basic principle must remain the same:  once society has given you $100 million for essentially playing pretend-time in front of a camera, the actor must in turn pay for the privilege of remaining in the public multiplex and limelight.  It's only fair.

For purposes of illustration, imagine that Tom Cruise had hit the 100 million mark at Jerry Macguire (1996).  Would he have been so quick to make Vanilla Sky (2001) or Valkyrie (2008) if each role had cost him a cool million?  Meanwhile, maybe his more modest turns in Magnolia (1999) and Tropic Thunder (2008) would only set him back $250,000.  Not only would this celebrity luxury tax force big-name actors to be more discriminating and invested in their roles, it might encourage others to get out of the game entirely.  I'm pretty sure Adam Sandler gave up caring about his movies a decade ago.  Think how much better it would be for him and for us if he could simply take his $100 million and walk away for good. Is there no one else out there with sufficient talent to put on a fat suit and yell at himself as his twin sister?

Money collected through this tax, meanwhile, could be put into some sort of competitive pot to fund young filmmakers.  I doubt Kevin James is up to the $100 million mark quite yet. But once Zookeeper 5: Tiger Trouble comes out in a few years, wouldn't you feel better knowing that James' had kicked in a couple million to help a struggling young visionary get her film on IFC?  I know I would.

As for Paltrow, maybe she gets a pass on Contagion, given her willingness to play a corpse.   But if she shows up in Oceans 15 as a spunky waitress who overhears the plans for the caper, or a down-home country girl safe-cracker, that's a cool million up front, please.

ADDENDUM: I have received a few complaints that this post contains "spoilers."  Contagion has now been in wide release, on cable, on DVD, and in airplanes for going on four months now.  At a certain point, having to edit around plot points so as to not reveal details to lazy Netflix customers becomes a "spoiler" to those of us who try to keep up with the contemporary state of cinema and culture.
Email Post
Labels: Celebrity Bullshit Cinephilia Commerce Fame Narcosis Filmed Product Spectacles of Death Valuable Advice to the Culture Industries