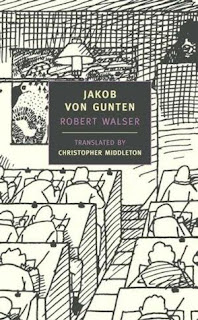 Do you have or know a child who is still way over-pixilated by the Harry Potter phenomenon?  Does this child continue to blather about all things Hogsworth, even as both the book and movies series have come to an end?  If so, Robert Walser's Jakob Von Gunten might be a good antidote.  It is the perfect book to reacquaint an overly enchanted child with a core theme of classic modernity--life is a tedious mystery beyond your control or comprehension where nothing much happens anyway.  Imagine if Kafka had tried to emulate J.K. Rowling and you will have a fairly decent grasp of the book's tone.

You can fool your gullible little wizard into reading the book by telling him or her that it is also the story of a small child who goes off to a distant and mysterious school--only in this case it isn't a magical college for wizards, but is instead the dreary Benjamenta Institute for young boys.  The school allegedly trains its students to become servants, but mostly it is the backdrop for unending tedium and torpor.

From three o'clock in the afternoon we pupils are left almost completely to our own devices.  Nobody bothers with us anymore.  The Benjamentas are secluded in the inner chambers and in the classroom there's an emptiness, an emptiness that almost sickens one.  All noise is forbidden.  One is only allowed to scurry and creep about and to talk in whispers.  Schilinski looks at himself in his mirror, Schacht looks out of the window or he gesticulates to the kitchen maids on the other side of the street, and Kraus is learning things by heart, murmuring lessons to himself.  It's as quiet as a grave.  The courtyard out there lies deserted, like a foursquare eternity, and I usually practice standing on one leg.  Often, for a change, I see how long I can hold my breath.

If you are looking to get the film rights...too late!  The novel was adapted in 1996 to be the first feature film by the Brothers Quay, which makes so much sense I think I may have dreamed it.  A clip is below.

Walser was institutionalized in the mid-1930s after "hearing voices," and though he quickly recovered and no doubt could have left, he nevertheless remained at the asylum until his death in 1956.  If you read Jakob Von Gunten, you will understand why.
Email Post
Labels: 00s boy energy legitimated nyrb