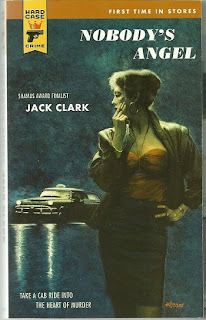 Here's a real page-turner with an interesting back story.  Nobody's Angel is the story of a Chicago cabbie, Eddie Miles, who finds himself in the middle of two unfolding crime stories.  Of immediate concern--someone is robbing and killing cabbies--and then, after saving a nearly dead hooker in an alley, Eddie spends his time looking for a van he saw near the crime scene.

But mostly, Nobody's Angel is about driving a cab in Chicago. There are some other characters in Eddie's life--an ex-wife and long absent daughter--a friend with benefits in his apartment building--his fellow cabbies--but most of the time Eddie is in his cab ricocheting around the city.  This stop-to-stop structure gives the book its pacing and sensibility as Eddie wanders the city in search of the next fare. If you've ever wondered how cabbies look at the streets as they decide who to pick up when and where, this book provides some insight.  It's also an interesting take on gentrification and poverty written from the perspective of a native who knows the history of Chicago's streets and neighborhoods.

Hard Case publishes both reprints of classic pulp and new titles in the pulp tradition.  Nobody's Angel is somewhere in between.  Clark wrote this book after some 30 years of actually driving a cab in Chicago.  He self-published Nobody's Angel in 1995 and sold copies to his passengers at $5 a pop.  A second novel in 2002, Westerfield's Chain, was a nominee for the Shamus award.  This edition is thus the first "official" printing of Clark's book, but in truth is a reprint of the self-published book of 15 years ago.
Email Post
Labels: 1990s Chicago criminal behavior drunks Hard Case not bad-pretty good in fact pulp