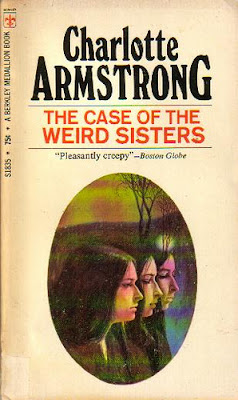 Just how weird are these sisters?  In truth, they're not so much "weird" as variously challenged.  Gertrude is blind. Maud is deaf.  Isabel is missing her right hand and forearm.  These are important clues when MacDougal Duff (Armstrong's bid for a recurring sleuth) arrives at their spooky old mansion in central Michigan to solve an attempted murder.

The fun begins when 20-something Alice Brennan agrees to marry her 60-something millionaire boss, Innes Whitlock.  It's all about money, no one has any illusions about that, but Innes is okay with buying the martial attentions of his secretary for a few years.  After accepting the proposal, Alice rides with Innes and his chauffeur Frank up to a lodge in the upper peninsula. But the car breaks down on the way--ten miles or so away from the Whitlock family home.  Enter Gertrude, Maud, and Isabel--Innes' three "weird" spinster sisters who do not not exactly make their daughter-in-law-to-be feel welcome.  There's also Innes' biological mother who the sisters force to live in a little cabin next to the ancestral home.

Once Alice and Innes arrive, odd things start to happen.  Innes gets violently ill after dinner.  And then a clock almost falls on him.  And then someone turns up the gas in his room and almost suffocates him.  Alice is relieved when her old college professor, Duff, arrives on scene to lend a hand figuring out the ongoing murder attempts.

Duff's task is to figure out just which sister could plausibly be behind each murder attempt, given their respective blindness, deafness, and one-armed-ness.  There's probably a word for this kind of mystery, and I'm sure that word is used all the time in relation to Agatha Christie, of which this seems a poor imitation.
Email Post
Labels: 1940s Gothic mystery