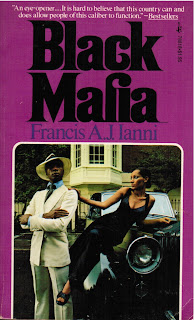 This is actually a rather straight-forward study in the sociology of crime, Ianni documenting how African-American and Puerto Rican gangs began taking over the drug, prostitution, and gambling rackets in Harlem and the Bronx during the late 1960s and early 70s, displacing the Sicilian Mafia in the process.  The history is very detailed, almost block by block, with Ianni even providing charts in the back of the book illustrating just who controls what in the new criminal order, either on the street or from inside the Big House.  City wide "ethnic" taxi scams also get some attention.

But the real star here is the art department at New English Library for crafting this beautiful typographic rip-off of Mario Puzo's The Godfather. Readers were no doubt lured by the promise of a multi-generational saga of Harlem's competing crime families--only to encounter the hard-hitting prose of sociology and urban studies.
Email Post
Labels: 1970s criminal behavior drugs New Yorkitude sex trade true crime