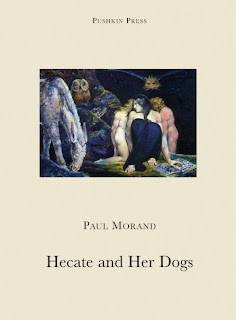 Can a paraphilia be transferred from one person to another in a kind of contact perversion?   Are you the owner of your own desire?  Just how depraved would you become if you had the freedom to do whatever you wanted?  These extraordinarily French questions are at the heart of Morand's Hecate and Her Dogs, a novella set primarily in Tangiers during the 1920s.

When a sixty-something banker's flight is rerouted to the north African city, it opens the Proustian floodgates of a torrid affair he had there thirty years earlier.  Sent to supervise the investment wing of a French bank, our narrator quickly sets up house and office so that he can then take a mistress.  And he finds one, the plain but enigmatic Clothide, a woman whose husband is on extended deployment with the French Army in Siberia.

Things go swimmingly at first--work all day, stargazing and sex all night--until our narrator begins to sense that Clothide is often "elsewhere" during their love-making. Particularly alarming, Clothide has an apparently spontaneous orgasm one night at the cinema as they watch a film about an orphanage
.
Vexed and increasingly insecure about his standing with Clothide, he arranges for the two to spend an entire week in bed--but this only makes matters worse.  A week in the sack apparently unleashes her full lust and depravity, Clothide's seeming insatiability becoming both a lure and a point of revulsion for the narrator.  And then one night she cries out in bed, "Ibrahim...you are black, like a devil...and you melt in the mouth."

Though the narrator began his affair with calculated indifference, he now realizes he is obsessed with Clothide's "secret" and that she has the "upper hand" in their relationship.  He begins spying on her, driving around the city all day to see where she goes and what she does.  And then, one afternoon, he visits her apartment to find her combing out the hair of two small Berber children, a boy and a girl.  The boy is introduced as...Ibrahim!

She likes them young, this Clothide.  In his obsession to regain control over her, our narrator gradually begins to realize that his desire is tied to understanding the perversions of his mistress.  Gradually he becomes caught up in her "tastes" as well, cruising the marketplaces of the city in search of children to defile.  Why?  Even he doesn't really understand.

In an afterword written by Umberto Pasti, he assures us the entire novel is a "masterpiece of camp" and all a joke at the expense of Morand's wife, a Parisian elite who, after the war, found herself stranded with Morand in Tangiers and extremely bored.  Camp or no, the book captures that particularly French model of desire that consistently locates it externally and elsewhere.  And sure enough, a quick Google search has found Hecate paired with Lacan on a syllabus for "Perversion: Theory and Literature."
Email Post
Labels: has ambition legitimated psychoanalysis Sleaze