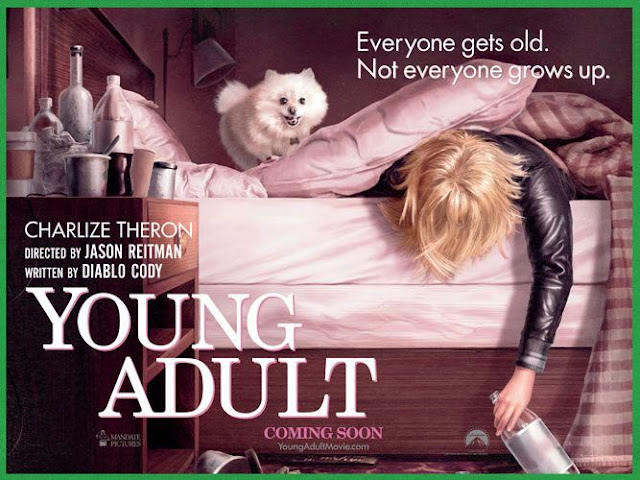 As I see it, Young Adult (2011) and Juno (2007) are the exact same film.  They may differ slightly in tone and emphasis, but do not be deceived, they are the exact same film.  To prove this, I will employ an old friend from the era of structural film analysis--the "semiotic square."  Briefly explained, the "semiotic square" allows us to examine how a fundamental opposition informs a given text.  When applied to Diablo Cody's Young Adult (2011) and Juno (2007), the semiotic square will reveal the underlying ideological foundations of what we will now call the "Codyverse."

Before proceeding, however, we must first delineate the three basic questions that inform the narrative progression of both films:
1.  Why are there no "normal adults" anymore?
2.  What is the proper relationship for a "normal adult" to have with popular culture?
3.  Who shall and shall not be granted proximity to a precious, precious baby?
All of these questions stem from the great REGRESSION crisis currently bedeviling the western democracies, a mass and now multi-generational stagnation in adolescence largely engineered and sustained by a culture industry that needs all of us to remain fixated on the products and fantasies we consumed when we were fourteen.  The promo art for Young Adult announces this crisis as its central theme: "Everyone grows old. Not everyone grows up."
Before unpacking Young Adult, however, we must first revisit Juno.  Below, the semiotic square illustrates how the four main characters embody positions derived from the film's structuring opposition of ADULT - CHILD.
JUNO (2007) 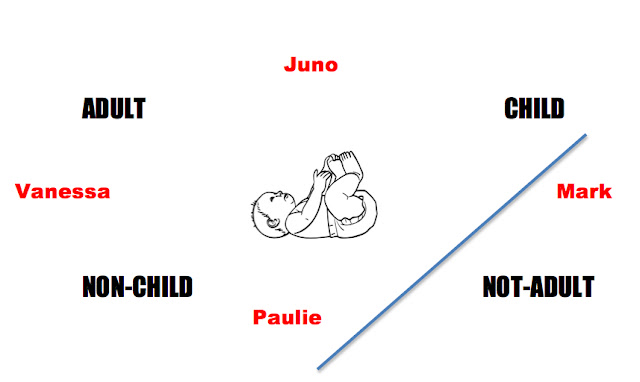 Before proceeding with the individual characters, it should be noted that the "semiotic square" typically does not have a baby at its center.  I have added one, however, because it is the precious, precious baby that provides the bedrock of the Codyverse.  Indeed, one could argue that both Juno and Young Adult are primarily concerned with arriving at the appropriate answer for Question 3 above: "Who shall and shall not be granted proximity to the precious baby?"
Juno herself, of course, assumes the "contrary" position at the top of the square, a wise-cracking teen who, though she seems mature beyond her years, must learn important lessons on the path to true adulthood.  As the only fully functional "adult" in the story, Vanessa (Jennifer Garner) will assume the Adult/Non-child position.  I will assign Paulie (Micheal Cerra) the "neutral" term at the bottom of the square as he is caught in a limbo between adulthood and childhood and is thus neither (as opposed to Juno's more forceful transition from Child to Adult). But the crucial term here is on the right side of the square: Mark (Jason Bateman) in the position of Child--Not Adult.  While Juno is about "Juno," obviously, its main ideological task is to punish Mark for his transgressive regression so that he might be expelled from the text and kept as far away as possible from the precious baby.
Mark's transgressions are these: 1). he still enjoys "punk rock" and "horror movies;" 2). he shares his expertise in these forms with a teenage girl; 3). he verbalizes his attraction to this same teenage girl, probably because she also likes punk rock and horror movies; 4). he bitches about how marriage forced him to renounce his ambitions to be a "rock star"; 5). he expresses a desire to live in a loft downtown; 6). he expresses some degree of hesitation over coming into proximity with the precious Juno-baby.   It's very straightforward, really.  Mark is the regressed male who, unlike Steve Carrell in The 40 Year Old Virgin, does not have a hip and patient Catherine Keener to save him from wallowing in perpetual adolescence.  Juno ends "happily" to the extent that Mark is exposed as a creep and must leave the world of wholesome suburban reproduction.
Now, let us move on to the even more diabolical case of  Young Adult:
YOUNG ADULT (2011) 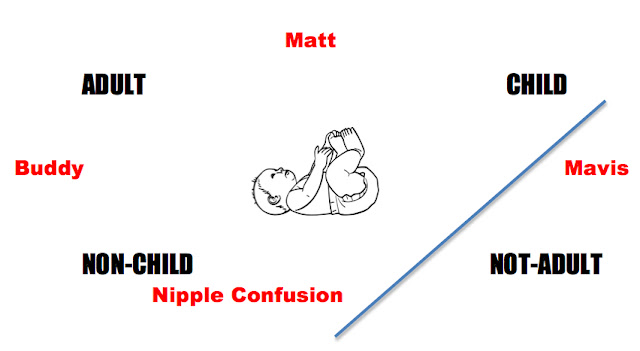 In this case, we will put Mark (Patton Oswald) at the top of the square.  Taking a page from Planet Apatow, Cody uses the narrative shorthand of a superhero figurine collection to signify Matt's regressed status.  And yet, Matt remains the only adult "conscience" in the film, consistently trying to talk Mavis (Charlize Theron) out of her ridiculous scheme to win back her old boyfriend, Buddy Slade (Patrick Wilson).  Buddy is for the most part a cipher, but as a seemingly committed husband and enthusiastic father, he fills out the necessary position of Adult--Non-Child.
Now, you might think Cody was somewhat harsh with Mark in Juno for punishing him so excessively just for enjoying the rock 'n' roll music and finding a witty teenager attractive.  Thus the genius of Nipple Confusion.   By placing Buddy's wife, Beth (Elizabeth Reaser), in a cover band made up entirely of new moms, Cody finds a more nuanced strategy for engaging question #2: "What is the proper relationship for a "normal adult" to have with popular culture?"  While Juno addresses this question in its most general form, Young Adult provides a much more focused analysis of the spectrum of regression by asking, "What is the appropriate relationship for a 'normal adult' to have with Teenage Bandwagon?" 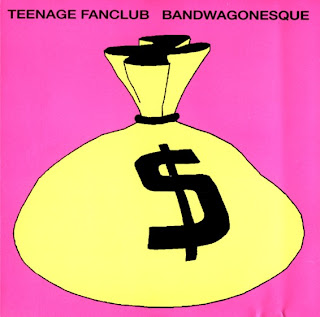 Recall that during the opening sequence, we witness Mavis obsessively rewinding and re-listening to the first verse of Teenage Bandwagon's song, "the Concept"--included on a now 17 year old mix-tape that Buddy made for Mavis when they were dating.  Mavis' fixation on repeating a moment of pop epiphany (crucially, she only wants to listen to the first verse/chorus over and over again) suggests that her relationship with Teenage Bandwagon is profoundly regressed and thus wholly dysfunctional.  Mavis' rewinding of the tape is offered, initially at least, as a playfully regressive memory for any audience member old enough to remember the courtship and technical protocols attending analog "mix-tapes"--but as the story proceeds, her fixation on "The Concept" retroactively becomes a sonic marker of Mavis having become "stuck" in the past.  She therefore has an "inappropriate" relationship with Teenage Fanclub.
As the drummer in Nipple Confusion, however, Buddy's wife Beth demonstrates a healthy and non-regressed relationship to Teenage Bandwagon.  This is because Beth, unlike Mavis, enjoys Teenage Bandwagon within the context of successful marriage and reproduction.  Indeed, Nipple Confusion is "cool" precisely because they have the "proper" perspective on life by virtue of their marriages and collective motherhood.  Single and without children, Mavis foolishly regards "The Concept" as a powerful anthem of romantic affect and possibility; Beth has the higher knowledge that the song is simply a quaint curio of their generation's heritage in '90s indie-rock culture.  Thus Mavis' profound horror when she discovers that Buddy has shared "their song" with obstacle-wife.
Which brings us to Mavis, who we see occupies the same position as Mark in Juno: CHILD--NOT ADULT.  And, also like Mark, the ideological work of Young Adult is to ensure that Mavis be kept as far away as possible from the precious, precious baby.  Taken together, the two films demonstrate just how profoundly invested the Codyverse is in maintaining rigorous moral parameters related to proper suburban breeding.
Young Adult, however, is a much more mean and nasty film.  Consider that in Juno Mark must leave in shame because he questions the centrality of breeding and parenthood in adult life.  This is a harsh judgment, perhaps, but at least Mark has some agency in his own fate.  He chooses to end his marriage and go live in a loft where he can spend more time listening to punk rock and watching horror movies.
Young Adult, on the other hand, makes the following division:
Successful Breeders                                                          "Crippled" Breeders
Buddy (functional penis and sperm)                             Matt (crooked penis)
Beth (functional uterus and ovum)                                Mavis (had a miscarriage)
Thus, Matt and Mavis' "regressions" are explained by a physical inability to assume the role of an adult breeder.  Unlike Mark, they are denied even the opportunity of questioning the breeder position--it is simply assumed that both desperately want a marriage and family (especially Mavis), but have "regressed" to a non-adult position as an effect of their reproductive failure.   Matt and Mavis are doomed because, in their cases at least, biology is destiny.
I would submit this is a fairly loathsome position to take on these issues.
Okay, I'm done.