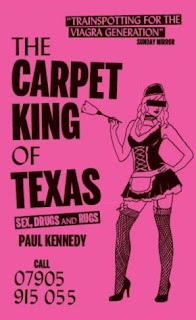 I don't read a lot of just-published fiction, but the cover of this book so desperately courted my patronage and approval, I couldn't resist (the book also comes in equally lurid purple and yellow).

Meanwhile, there is JJ and John, father and son smackheads who are the blight of their council estate.  With Mrs. Smackdead long dead, JJ now uses 14-year old John as his tool for scamming the daily funds necessary to support their habits, ventures that range from purse-snatching to pimping out John at a public restroom.  Having never been to school and shot-up with Heroin almost daily by his dad, John lives in a weirdly detached reality where his only friends are the cat next door and Superman.

Finally, there is the "carpet king" himself, Dirk McVee of Dallas, who uses his trips to the U.K. as an excuse to get away from the wife and kids so that he might go on week-long cocaine-fueled benders of dirty, filthy sex with dirty, filthy hookers.

Kennedy apparently worked the Liverpool crime beat for many years as a reporter, and so he has a lot of no doubt true and truly sickening details to squeeze in here.  It's generally well-written, although maybe about 100 pages too long.   And, as with all novels that seek to "shock" the reader about street life, the endless parade of drug-taking and sleazy sex ends up being funny in places as the characters, much like the aristocratic swells of Dwain Esper's Narcotic (1934), endlessly verbalize what they plan to smoke and fuck.  "I'd like to do another couple of fat lines of coke, and then let's try some double-penetration!"

As we know from the very opening of the novel, the three story-lines eventually converge for a particularly protracted study in sleaze, leading up to a climax that seems so over-the-top that one has to assume it actually really did appear on the Liverpool police blotter.

I think Kennedy meant this to be a stridently anti-drug morality tale--but there may be an even more sinister moral to his story, namely this:

If you are rich and have unlimited access to clean cocaine, matched with the temperament to use it in moderation, you and your sexually adventurous spouse have access to a world of unending hedonistic pleasure with fellow kinky-Coke users from around the globe (especially if you live in Amsterdam)--but if you are working-class and from Liverpool, you will inevitably end-up shooting smack into your gangrenous stump before dying a horrible death.
Email Post
Labels: criminal behavior drugs sex trade Sleaze slightly disgusting UK