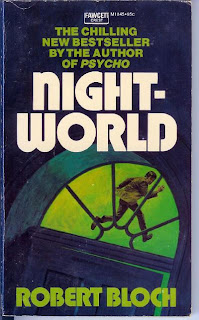 Karen Raymond receives a call telling her that her husband, Bruce, is finally ready to leave a private asylum nestled in some obscure corner of the San Fernando Valley.  But when she gets there to pick him up, she finds that the nurse, orderly, and head psychiatrist are all dead (hooked up to and fried by his own ECT machine).  All the patients, including Bruce, are missing.  From here, Bloch uses some extremely unreliable narration to keep us in suspense as to who the killer might be.  All signs point to Karen's once-crazy husband, but then again...

Pretty average, really.  Interesting primarily for it's pulp-vernacular echoing of Joan Didion's The White Album, Bloch setting his tale of psychopaths on the loose against the general "bad vibe" of L.A. in the early, post-Manson 1970s.  The psychopath does get a nice bit of first-person narration about drum majorettes and parades and how much he hates them both.  Oh, and also, some dobermans attack and kill their owner after the psychopath hops them up on amphetamines.
Email Post
Labels: 1970s amok golden state of mind hippies psychiatry psychokiller pulp