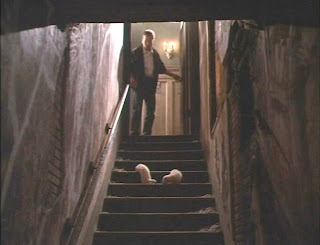 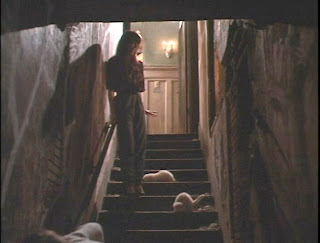 Threatened by demons and a grad student possessed by Satan, three characters in Teenage Exorcist (1991) descend a staircase into a dark basement.  Shot from the bottom of the basement stairs, the door opens to illuminate two furry creatures scurrying on the steps.  Generic expectation tells us these will be rats. Filmmakers have long used rats to signify a threshold, a crossing over into a space marked by filth, danger, occultism, and potential degradation.  As the shot holds, however, we sense that these are not ordinary rats.  Their proportions seem slightly off, their movements uncharacteristic.  Two characters proceed down the stairs relatively unconcerned with the furry obstacles, but the third (crucially, a woman) seems momentarily paralyzed by the  creatures.  "If there's anything I hate more than spiders," she says to no one in particular, "it's rats!"  An inserted close-up, however, confirms our previous suspicion. These are not rats at all, but ferrets.  Two little white weasels. 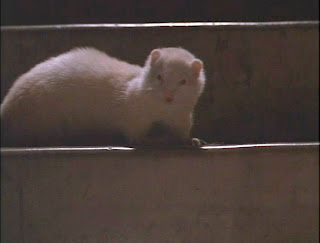 How are we to account for these ferrets?  As the title suggests, Teenage Exorcist attempts to balance horror and comedy.  Are the ferrets simply a joke, a way of playing on our expectations for the obligatory basement rats?  If so, it is a rather ineffective mode for staging comedy.  Allowing the animals to first roam free in a long-shot only serves to undercut the humorous revelation of the ferret insert. Rather than present a surprising visual gag, the reveal merely resolves the ambiguities at play in the long-shot.  So that's what those are!  Weasels!  The insert is less comic than confirmational, akin to straining one's eyes through bi-focals to finally cohere a blurry image.

Another possibility presents itself.  A low-budget quickie, perhaps Teenage Exorcist simply could not afford professional rat wranglers.  As films like Willard (1971) and Ben (1973) demonstrate, directing rats requires more than simply letting them loose on the set.  In this scene, for example, untrained rats would most likely flee when confronted with three towering humans descending the staircase.  Only a "pro" would hit and remain on his mark at the center of the frame.  Could it be that the producers, unable to access adequate rat talent, simply opted for a more manageable "look alike" scenario, employing someone's docile pet ferrets from home as rodential body-doubles?  The line of dialogue lends support to this thesis as the woman descending the staircase clearly understands them to be rats and treats them as such.

But the insert apparently contradicts this assertion.  Perhaps we are meant to see that the character has clearly misidentified the animal, which is not only "comic" (albeit slightly),  but also positions this character as somewhat stupid. And yet the film offers no additional evidence in this respect, no other malapropisms or misidentifications in the script that mark her as particularly ditsy.

Much of this ambiguity hinges, of course, on whether or not an audience in 1991 would recognize a ferret as a ferret.  Here we must turn to the Wiki-gods for information on the history of domestic ferret distribution:

Given this "likely" population, would a viewer of Teenage Exorcist in 1991--most likely a teenager himself--recognize a ferret when he saw one?  Had ferrets achieved enough visibility on the terrain of popular pet culture by the early 1990s so that a filmmaker might dependably employ one for a cutaway gag (however poorly staged)?  Perhaps ferrets themselves, as relatively recent additions to the North American roster of domestic pets, enjoyed a more fearsome reputation in this era.  But Wiki suggests this is unlikely:

The motivation and function of the two creatures thus remains unclear. Sadly, turning to the duration of the ferret insert is of little help.   A quick, fleeting cutaway to the animal might support the thesis that the editor hoped to deceive us with a clever substitute.  A more lingering shot, meanwhile, would lend credibility to the idea that we are meant to encounter the ferret in its full ferret-ness, a visual rejoinder to the woman's nervous declaration of musophobia. But maddeningly,  the insert is two seconds long--enough time, seemingly, to confirm a ferret sighting, but also short enough to sustain the plausible illusion of a rat, especially for someone who has never before encountered a ferret.  Further cognitive testing in animal recognition skills would be necessary to answer this question more definitively.

Still, given that the director took the time to pick-up a ferret insert, I think we have to assume that Teenage Exorcist's ideal spectator is supposed to see the animal as "not-a-rat," as an animal of another order.  Staging a ferret-as-rat illusion, after all, would be better served by remaining at the more deceptive shot scale, not unlike John Ford's handling of the crucial murder scene that structures Young Mr. Lincoln (1939). 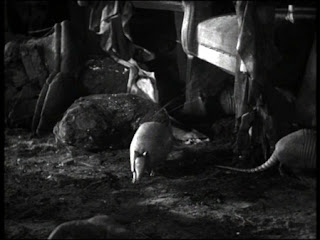 A final possibility.  In Tod Browning's canonical adaptation of Dracula (1932), armadillos and opossums wander about Dracula's castle, ostensibly as "unnatural" and thus horrifying animals.  Jonathan Harker and the city folk of the thirties who had never seen such creatures before were no doubt meant to shiver at the sight of these weird creatures.  Both armadillo and opossum, after all, occupy that liminal zoological zone between the oddly cute and the manifestly disgusting.  In this tradition, perhaps the ferrets of Teenage Exorcist appear wholly as a sign of animal Otherness, uncanny creatures that serve as befitting sentinels for the entrance to Satan's lair.  They are like rats, and yet somehow distorted, perhaps evoking the idea of super-rats or demon-possessed rats.

More competent narration would have aided us in sorting out these ambiguities; that is, of course, if we assume narrative legibility to be the primary goal of Teenage Exorcist.  As it stands, we are left haunted by a certain indecipherablity in these creatures.  Why have they suddenly appeared?  Which genre logic motivates them?  Are they shot for maximum clarity or confusing obfuscation?  Are we meant to be amused or horrified at their appearance?

It would seem these are to remain among the cinema's many unanswerable questions.