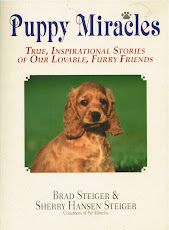 “I believe that, if you have a very beloved dog-one you’ve had for years and you’re very close to—when he dies, he goes to God before he goes over the famed Rainbow Bridge. I believe that he helps God choose your next dog. He whispers secrets into your new pup’s ear, telling him who to look for and what to remember when he gets there.”

Among the “miracles:”
--dog survives a lightning strike.
--fat dog survives eating a soggy paper towel.
--dog has six puppies but nevertheless leaves with human family for vacation the next day.
--dog swallows bell and makes ringing noise when shaken.
--puppy paralyzed by meningitis recovers use of legs.
--puppy born with green fur.
--dog finds way to girl’s bedside in hospital after she is hit by car.
--Pekinese defends child against bear.
--dog breaks back when caught under garage door; children hold prayer vigil and dog regains ability to walk.
--dog saves boy from water moccasin.
--man falls in frozen lake with dog; his other dog arrives and first saves the dog in the lake, and then both dogs work together to save the man.
--Shih Tzu adopts two orphaned kittens.
--woozy post-partum dog prevents muskrat from consuming newborn pups.
--dog frozen to railroad tracks freed moments before train arrives.
--man dresses basset hound as Frankenstein for Halloween, but neighborhood children find the dog adorable rather than frightening.
--dog rescued from giant hole.
--lifeguard saves puppy under attack by male goose.
--man sees his old dead dog as a puppy during his own near-death experience.