"The objective of combat shooting is to deliver directed or aimed fire at an armed opponent as rapidly as possible while offering minimum target area for return fire." Thus begins Combat Shooting for Police, a comprehensive guide to loading, aiming, discharging, holstering, and cleaning a police firearm. Most of the advice is what you would expect, but a chapter on "Aimed Fire" (as opposed to "Defensive Shooting" --which means basically spraying bullets until you can find cover) features a shooting stance that seems to have disappeared from the combat arsenal. 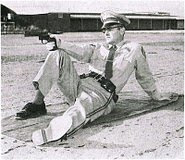 Illustrated here  is "The California Highway Patrol Sitting Position." I'm pretty sure this style was never used on CHiPs (unless maybe Baker or "Ponch" first took a bullet to the kiester). The advantages in steadying one's aim should be obvious, but no doubt this position has been abandoned for the same reason no one shoots the "granny shot" in the NBA anymore--it just doesn't look cool (even though several physicists have opined that the "granny" shot is statistically more accurate).
Email Post
Labels: 1960s art Inexplicable true crime what boys think about