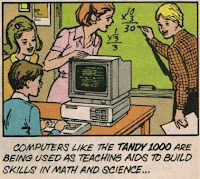 These panels come from a Radio Shack comic book about "Electronics and Space Exploration," given away free to kids in the autumn of 1986.  The idea was to hook kids into the wonders of science as a means for marketing various Radio Shack products at them, like the Tandy 1000.  Structured as a "science fair" lecture, the comic is a testament to the folly of technological forecasting.  Worse yet, it also speaks to just how enfeebled the United States has become in coordinating any type of coherent technological agenda over the past 30 years or so.

As we join the class, "Ms. Smith" opens her lecture with a brief discussion of the Challenger disaster--which at this point had happened only a few months previously.  She reminds the class that while the death of the 7 astronauts was a tragedy, over 40,000 people died that same year in car accidents.  A smart child at this point might question why we have cars, but here the information is meant to demonstrate all "exploration" requires sacrifice of some kind, even if that sacrifice is getting T-boned in a quest for a Burrito Grande at Taco Bell. 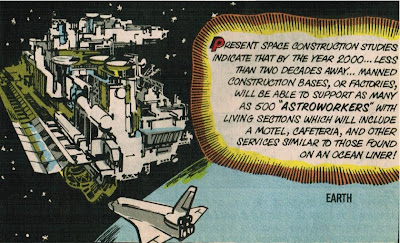 With that unpleasantness out of the way, there proceeds a standard account of man's relentless desire to explore distant lands.  Vikings and Columbus appear alongside Armstrong--but of course with no mention of conquest, pillaging, smallpox, or that nasty moon plague Buzz Aldrin so clearly brought back to earth.  The story of flight concludes with the many marvels that will soon exist thanks to the Shuttle program (again, despite the Challenger example).  Most disheartening is the book's vision of the International Space Station (above).  As with all visions of future space construction, we have again fallen short.  Here we are told that in the year 2000 (once the baseline for all future amazement, now sadly little more than the year of Bush v. Gore and the final tipping point in the nation-state's inexorable decline), over 500 "Astroworkers" would be on the station--complete with a motel, cafeteria, and other services. It will be like an "ocean liner" in space.  Sigh. 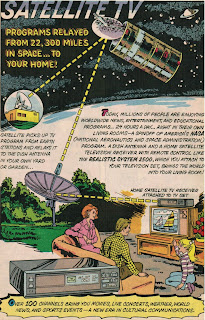 But Radio Shack really only uses the Space Program (still of residual interest to children in the mid-1980s) as a hook to talk about electronics, and in particular, how all the wonders of electrical science have led to things you can buy at Radio Shack.  Typical is this panel on "Satellite TV," where the marvels of Edison, Marconi, NASA and others have at last realized their destiny in the Realistic System 2500, a technology offering over "100 Channels" that will usher in "a new era in cultural communications,"including the abililty to watch the sailboat channel. 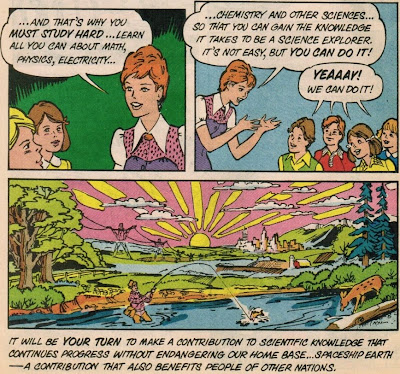 Most melancholy of all is the book's grand finale. Our instructor Ms. Smith reviews all we've learned so far, and tells her class that "man" will always be in search of new knowledge and new opportunities.  America, she continues, is uniquely positioned to continue leading the way in scientific endeavors because of our "freedoms, opportunities, and knowledge."  She tells her class they must work toward the new scientific discoveries of the future, prompting an enthusiastic cheer from the class.  And then the final panel: "It will be your turn to make a contribution to scientific knowledge that continues progress without endangering our home base...spaceship earth--a contribution that also benefits people of other nations."  We see a man fishing in a stream while a deer grazes near by.  Power lines recede toward the horizon where the sun sets on a distant city--nature, technology, and energy generation all in perfect balance.  But of course sadly, and especially at present, the prospect of a functional energy policy seems even more distant than the buffet line on the Lunar Love Boat.