17-year-old Laura has ‘been around,’ which is Eisenhower-speak for a total slut. She takes the rap for her stupid boyfriend Earl and ends up at Ferndale—a home for wayward, insane, and otherwise delinquent girls.  There she meets the 30-something Miss Edwards, a reform-minded counselor who thinks bad girls can be saved if adults will just listen to their problems and take them seriously.  Miss Edwards tries to show Laura that Earl is a jerk and she should move on with her life. Convention would dictate this to be the beginning of a lesbian affair conveyed through euphemism and innuendo. 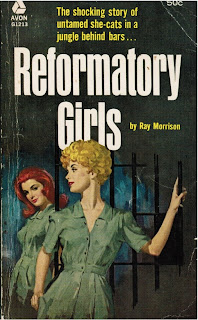 But Reformatory Girls has other plans. One night Laura tries to escape through an air vent to go meet Earl in town.  On the way she crawls under Miss Edwards’ apartment and overhears the creepy warden trying to seduce her. A few nights later in another vent crawl, she overhears the warden on the phone and learns he is a liar and a cheat. As eavesdropping from an air vent proves to be such a convenient device for revealing narrative information, Laura sneaks out a third time--discovering on this trip that Miss Edwards is a virgin!   This significantly changes their counselor/counselee relationship, which so far had been based on the fiction that the older Miss Edwards knew more about life than Laura.

Laura busts out, gets caught, is sent to “real” jail for a week, and then returns to Ferndale just in time for the mandatory prison riot.  And then the twist ending: Laura breaks up with Earl, realizing he really is a creep.  But Miss Edwards—big on college smarts and yet stupid about men and their ways—has decided to marry the creepy warden.  In the final scene, Laura and Miss Edwards embrace and have a good cry.   Says Laura to herself: I cried because I was back at last after a long, long trip down nowhere road, and because she was taking that same lousy road.  I cried because I didn’t have the power to stop her, and because I wasn’t sure she’d make it back.  So, basically, Reformatory Girls bills itself as “the shocking story of untamed she-cats in a jungle behind bars,” but then turns out to be more a generational meditation on what constitutes emotional/sexual/intellectual maturity.  Didn’t see that coming from the cover.