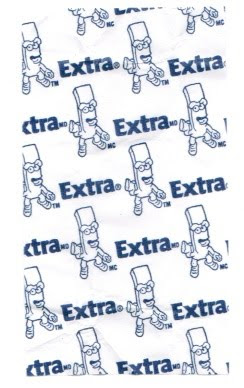 Evidence continues to mount that our species has grown weary of the limitations posed by the physical body.

For example, I bought a pack of gum without really looking the other day and ended up with something called Wrigley's Extra Pomegranate Berry.  Like so many other sweet things destined for the mouth these days, chewing this "Extra" gum was akin to having your tongue injected with the same complex compounds that animate the notorious "Sweet Tart."  The basic effect engineered by these chemical-bombs is the instantaneous souring of all exposed tissues and mucous membranes, culminating in a reflexive "suck-a-lemon" face.  Clearly, the gums and candies of elder humans are no longer sufficient to the task of distracting the millennial palate, which demands nothing less than transforming its saliva into the runoff from a DuPont plant.  There are two ways of looking at this, I suppose.  Either we are becoming a race of super-beings demanding ever more intense and exotic pleasures; or, a century of over-stimulating the sensorium has made us all so dead that nothing less than freebasing a Pixie-Stick on the tongue is required to remind us we are still vaguely alive.

Actually, both theories could be true, as is the possibility that the gum is just some type of elaborate corporate prank.  Each piece of Wrigley's Extra Pomegranate Berry gum comes wrapped in paper bearing the image of the brand's apparent mascot, an irksomely anthropomorphic "gum-man" pointing at the consumer while sticking out his tongue, as if to say,  "Got you, dumbass, with my extra tart, extra sweet, kick-ass joke gum." It is the same expression one would expect to see on Biff, Timmy, or Moose in the early 1960s after he tricked you into eating a piece of "hot-pepper," "onion," or "fart" gum ordered from the back of a comic book, except we now seek out and embrace such humiliation. 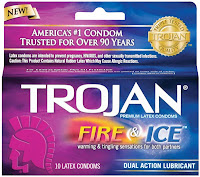 A similar move toward amplification seems to be afoot in condom technology.  Given my painfully arrested taste, I tend to see a lot of television aimed at teenage boys, and of late the Trojan corporation has taken to these channels to market a new product line of "Fire and Ice" condoms.  The idea, apparently, is to douse the condom with a "warming" fire lubricant on "her" side and a "tingling" ice lubricant on "his."  Reviews appear to be mixed (and hilarious). Obviously, humans have devoted great ingenuity over the years to devising strategies for intensifying sexual pleasure-- strychnine, amyl nitrate, THC,  and autoerotic asphyxiation are among the better known.  Significantly, however, all of the above involve intervening at the level of neurotransmitter chemistry--jamming some type of psychopharmacological spike into the brain's pleasure center.  With "Fire and Ice" condoms, on the other hand, we are apparently rejecting the whole "sex is in the brain" crap (both mentally and chemically) and reterritorializing desire to its most primitive origins--aggressively irritated genitalia.  Again, two explanations offer themselves here.  One could argue that teenage boys, in those awkward years before anyone will deign to have sex with them, spend a great deal of time inserting their johnsons into all manner of objects and potions in an attempt to simulate what they imagine actual intercourse will be like.  In this respect, Trojan "Fire and Ice" condoms may simply represent the prolongation of a certain "perverse" structure of autoeroticism in which actual women are irrelevant, perhaps even distracting.  Then again, as with Extra gum, perhaps there is a species-wide fatigue with "normative" genital stimulation.  Having served as a durable motivator for much human activity over the years, perhaps sex itself is looking for a reboot--not in terms of fantasy, technique, or practice--but in the basic physiology of wiring and transmission.  Or, finally, perhaps Trojan "Fire and Ice" is less a sexual enhancement than a relationship tool for fostering greater intimacy.  After all, nothing brings a couple together like a mutually exacerbated chemical burn.

All of this makes me think how unlucky the Wackowskis were in timing the release of their remake of Speed Racer (2008).  There have been many candidates of late for the illusory film that signals the next phase of cinema, at least within the wing of popular enthrallment: Avatar, Pixar product, and that film with real people and CGI zeppelins from a few years back have all been advanced as likely candidates.  Everyone seems to agree the century's new cinema will involve overwhelming levels of digital hallucination and, like Extra gum and Fiery condoms, strategies of intensified saturation on every stylistic vector:  color, editing, camera movement, sound, etc.  Some might even nominate the Wackowski's more famous Matrix trilogy for this honor.  While it is true that ever since the Matrix cinema-goers have been forced to contemplate bullet trajectories and karate moves in excruciatingly precise, slow motion, I still believe history will demonstrate that Speed Racer was the true work of the break, the film that will serve as the degree-zero of all future film style.

When the Wackowskis set out to make the painfully important Matrix films, one of the many influences they sought to pay homage to was the work of Jean Baudrillard.  Early in the film, Neo hides an illegal program in a hollowed out copy of Simulation et Simulacra, and apparently Baudrillard himself was asked to make a cameo in the film.  There is a hilarious interview in Baudrillard's The Conspiracy of Art (2005) wherein he takes the Wackowskis to task for their characteristic misreading of his work through the lens of Neo-Platonic wankery.  Quips Baudrillard, "The Matrix is the kind of film the Matrix would make about the Matrix" (demonstrating once again that you can never defeat Baudrillard, you can only hope to contain him). 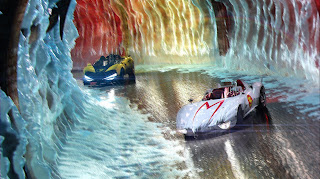 Speed Racer is the much more appropriate homage.  Rather than pose the crisis of contemporary cinema/media as a tired debate over what is "real" and what is not (a la The Matrix), Speed Racer courageously collapses making any such distinctions anymore, not just in terms of CGI photorealism, but at all levels of style and emplotment.  It is, quite simply, the most vacuous movie ever made--but absolutely brilliant in the clinical perfection of that vacuity.  Most movies entertain at least the possibility of some degree of depth--in characters, motivation, indexical reality.  Not so Speed Racer.  Next to the avant-gardists  who paint or scratch directly onto the film strip, Speed Racer is the closest thing I've seen to a cinema of pure surface.

One might argue, isn't that true of all animation?  But therein lies the brilliance of the film.  Whereas so much animation--cel and digital--has attempted to look "real," and while other filmmakers have shot live action in a way meant to evoke animation, Speed Racer quite deliberately composites its elements so that it is both yet neither.  The frame below is typical.  In the background, a photoreal sunset with clouds, stars, and a distant stadium.  The paint, rivets, and dirt of the metal track have a similar texture of CGI verisimilitude.  But then the race cars pass by like so many candy-coated Skittles, hugging a race course that embodies the film's commitment to forms of popular spectacle that might exist beyond current physics.  Overly articulated neon signage rhymes with the impossibly saturated cars, while toward the bottom left of the frame a single white spotlight flares brightly, perhaps to underline the irony that no actual light appears anywhere in the film.

If Speed Racer was just pretty to look at, that would be one thing.  But happily the Wackowskis carry this commitment to profound superficiality to the realm of affect as well.  There is only enough "story" here to motivate the various racing sequences, and while the film does follow a putatively "classical" structure, it would be hard to imagine having less at stake in either the characters or the plot.    Adapting a Japanese cartoon that was already primarily about motion and color helps a great deal in this respect, as the narrative architecture of the original Speed was hardly Dickensian.  Speed and Trixie appear to be in love and betrothed.  There's Pop, Sprittle and the monkey.  The only character with any enigma attached is Racer X, who appeared only intermittently in the original series.  But somehow, the film manages to make you care even less about the fully embodied Racer X than one did about his 2-D animated template from the '60s.  In the Wackowski's version of this world, all moments of dialogue and character "development" serve primarily as a type of eye sherbet--brief moments of limited excitation that cleanse the visual palette for the next round of hyperstimulation.

Some were chortling a few weeks ago when Sony announced it would produce a film based on the Atari videogame, Rollercoaster Tycoon.  Here is a new low, many predict, in the cinema's ongoing conflation with the theme park ride, the final literalization of the oft-heard description of the action blockbuster as a "real rollercoaster ride."  For me, at least, that thunder has already been stolen by Speed Racer. 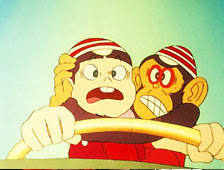 So I would like to propose a new form of "cult" film, one that takes full advantage of digital imaging technologies and new modes of 3-D and IMAX exhibition.  Rather than dress up as favorite characters or fantasize about more fully realized narrative worlds like Rocky Horror fans and Trekkies did in the last boring century, I would like to see Speed Racer brought back at midnights on the biggest screen possible in every major city.  Next to the ticket-taker, a huge bowl full of MDMA, Xanax, Ritalin, and Starburst Fruit Chews.  Each patron will also receive a single dose of eye drops for maximum pupil dilation. There will be no attempt to take the experience beyond the theater, to lose oneself in a webwork of ancillary texts and marketing--only 135 minutes of raw sensation and spectacular acceleration.  And if someone is willing to partner up for a quick round of "Fire and Ice" in the back row, so much the better.
Email Post
Labels: Bio-Horror Commerce Fatal Strategies Generation XYZ Overstimulated Consumers