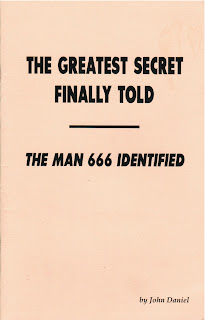 Another entry into the always popular "who is the beast?" of Biblical 666 fame.  Before the big reveal, however, Daniel wants you to take note of the fact that various streets in Washington D.C. connect in such a way as to reveal a pentagram, evidence that the "Founding Fathers" were stone cold occultists.  From here we turn to the Washington Monument and its origins in the pagan cult of sun worship dating back to ancient Egypt and the story of Isis and Osiris.  Easter, as it turns out, is a remnant of this era, while church steeples are symbols of Osiris' phallus restored.  Some numbers are then brought out that add up to 666 in various ways, moving us to the central enigma--who is Mr. 666 (or less likely, Ms. 666)?

It's the pope.  Which pope?  Any and all popes.  Pontifex Maximus across history is the "beast."  "Rome" has always been the enemy of "true" Christianity and always will be--that is until Jesus returns and kicks Catholic ass.  In the meantime, the USA is destined to remain the military wing of Rome.  This is because Jesuits and Freemasons streamed into the American colonies in the mid-18th century to counteract the creation of a new Protestant nation.