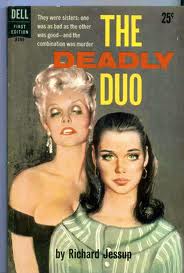 Brunette sister is briefly married to the son of a rich British family.  They have a boy, separate, and then the husband dies in an accident.  Since the brunette is American trash, her aristocratic mother-in-law is determined that the boy shall be raised as befits his lineage.  She offers a cool five million for the brunette to hand the kid over, but no dice.  Enter the brunette's trashy blond sister, a bosomy has-been Hollywood actress who needs the scratch and needs it bad.  Blondie tells sister she would be a sucker not to take the money.  But blood is thicker than five million, at least for the brunette, and she refuses.  Looks like Blondie will have to take matters into her own hands...with murder!

Despite the intriguing premise of sororicide, this one has nothing really to recommend it.  Jessup later adapted the book into a film in 1962, directed by Reginald Le Borg.  Of course, in the Hollywood version, the sisters ended up being identical twins, either to cut down on acting costs or for greater uncanny bafflement.
Email Post
Labels: 1950s Hollywood pulp