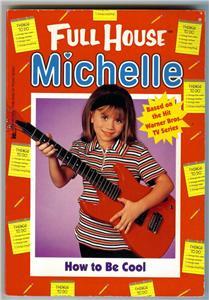 Michelle, of Full House fame, is saddened that her classmates do not consider her to be as "cool" as Loreen, who everyone agrees is extraordinarily cool.  After consulting some teen fashion magazines, Michelle cuts diamond-shaped holes into all of her clothes and dyes her hair blue.  Unfortunately, this has only minimal impact in elevating her cool quotient at school.  She is also momentarily humiliated when her blue hair dye attracts bees during a big soccer match, compelling her to opt instead for a Halloween wig that she cuts to be hip and spiky.  Renaming herself "Jet," Michelle's new persona begins to have the desired effect at school.  After bragging about her talent for playing the electric guitar, "Jet" is invited by the supercool Loreen and her boyfriend Spike to join them in rehearsals for the upcoming talent show, an invitation happily accepted by the now extremely cool Michelle/Jet. Though she doesn't play guitar, she is confident her uncle can teach her in a week.  After joining the band, Jet quits the soccer team and begins to ditch her life-long friends, actions that are roundly criticized by other members of the "full house."  The night before the big rehearsal, Jet remembers that she still can't play guitar and so she tries to cram all her lessons into one night.  As this is impossible, Jet devises a scheme whereby she will pretend her electric guitar is broken so that she can have more time to learn.  This plan, of course, goes horribly awry, and in the end Jet has to admit she can't play the guitar.  Moreover, she misses soccer and her old friends, so she decides to go back to being plain, old, boring "Michelle."  Everyone agrees Michelle is pretty cool just as she is.
Email Post
Labels: 1990s kids mind control TV what girls think about